Replacement parts for your Xbox One Wireless Controller 1537 model to fix your broken device! 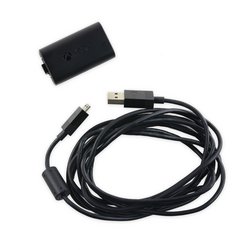 The Xbox One Wireless Controller 1537 (7MN-00001), was released in 2013 and was bundled with the original Xbox One gaming console, but was also sold separately. This controller shares some resemblance to its predecessor, the Xbox 360 controller, but changes have been made:

The controller can alternatively be identified by a label inside the battery panel on the back that reads "Wireless Controller for Xbox One".