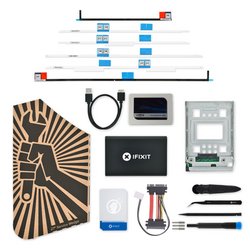 Upgrade the storage and improve boot time and read/write speed in your iMac Intel 27" Late 2012-2019 with this SSD upgrade bundle.

In October 2012, Apple announced an update of the 27" iMac. From the front this machine looks similar to the edge-to-edge glass face of its predecessor, but the new rear aluminum case tapers to a mere 5 mm at the edges. Laminated to the cover glass is a 2560x1440 16:9 widescreen IPS display. External ports include four USB 3.0, two Thunderbolt, and Gigabit Ethernet. Late 2012 models feature quad Core i5 and i7 processors.