We’ve got all the parts and tools to get your Moto X4 smartphone working again. 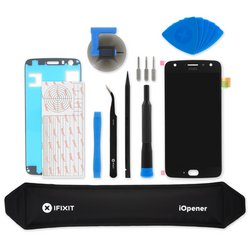 The Motorola Moto X4 is the fourth generation in the Moto lineup and was released in the US in October of 2017. The Moto X4 is IP68 water resistant and uses the TurboCharger to charge its battery quickly. It features a 5.2” 1080x1920 screen, dual rear cameras, a front 16MP camera with flash, a Qualcomm® Snapdragon™ 630 processor with 2.2 GHz Octa-core CPU and 650 MHz Adreno 508 GPU. It has 3GB of RAM and 32GB of storage, with an option for 2TB of microSD memory.

Once you've bought your parts and tools, check out iFixit's Moto X4 repair guides for step-by-step instructions on how to make the fix.