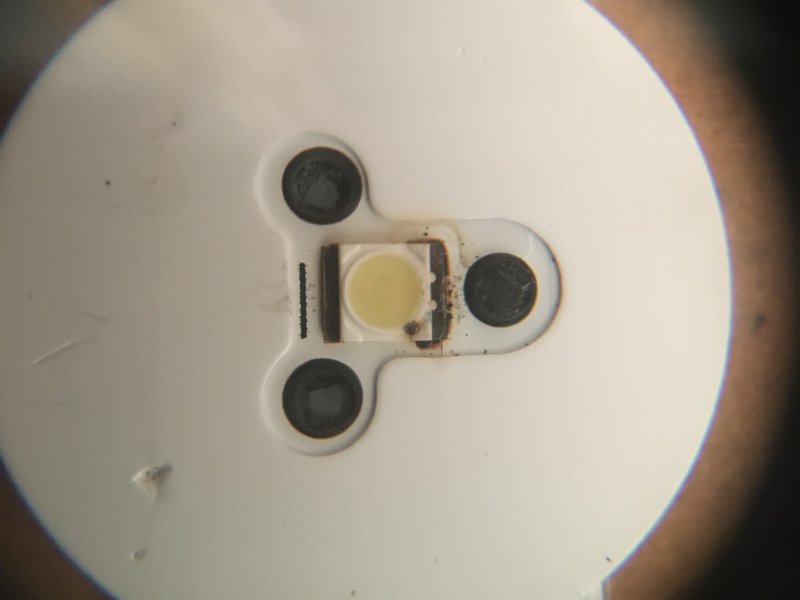 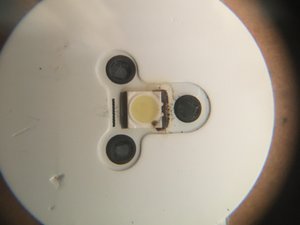 Repair noise in headphones. May apply to other models other than this 32" from 2014. The headphone hiss was due to a failing backlight led

This LG TV had a slightly annoying hissing crackling sound in the headphones but not on the speakers and had been occurring for many years (it was mostly used with headphones with a treadmill so there were other ambient noises).

However the TV was in for repair for a backlight failure where just one of 21 led’s (in three strips) had failed. Replacement of the faulty backlight led strip not only repaired the TV’s image, but also happened to cure the noise in the headphones.

The faulty led is shown in the image with the lens removed. (The three black circles are just the glue that hold its lens in place). The brown patches on and around the yellow led were also visible with its lens in place

It is assumed that this arcing around the led was the cause of the noise in the headphones because with a new led in place the headphone noise disappeared.

The arcing was presumably caused by a poor solder joint and was occurring years before the actual led failed open circuit.

It is concluded therefore that a visual inspection of the led backlight array (the use of a hand lens may help) may find a failing led which should be replaced to cure headphone noise and to prevent future failure of the backlights.

There are plenty of YouTube videos showing how to dismantle the various TV’s and to replace either the backlight led strips (fairly easy) or just the single led which is a surface mounted device which requires soldering skills.