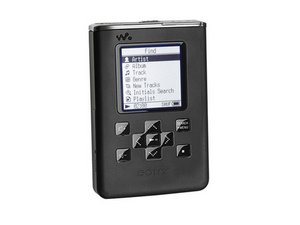 The Sony Network Walkman model NW-HD5 is an MP3 player released by Sony in July 2005.

The Sony Network Walkman model NW-HD5 is an MP3 player released by Sony in July 2005. The NW-HD5 was released as the second successor to the NW-HD1 model, which was released in 2004 amid the Apple iPod’s widespread success and called the “world’s smallest portable audio device.” The NW-HD1 model was Sony’s first hard disk-based audio player. The NW-HD5 was sold in direct competition with the 4th generation iPod.

The NW-HD5 model featured a design update from the HD1/HD3 models with a simpler control system, a user-removable battery, an upright handheld format, updated software, and better file format compatibility. The HD5 model also featured a “Follow Turn Display” that automatically aligned itself based on how the player was held on startup. This Walkman was advertised to have a running time of 40 hours when using low-quality format settings and no player-based audio enhancements. The device could run for 30 hours for 128 kbit/s MP3s.

The NW-HD5 model was sold in black, silver, and red body colors. Some NW-HD5 models were shipped with cosmetic design flaws that caused buttons to develop small cracks under the device’s plastic coating. In January 2006, production of the NW-HD5 model ceased, partially because of these design flaws.