This procedure requires the following tools:

Before you begin, do the following:

• Place the computer face down on an ESD mat.

1. Remove the three screws along the back of the hard drive. 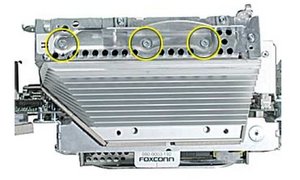 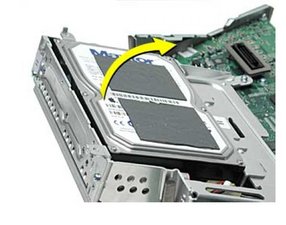 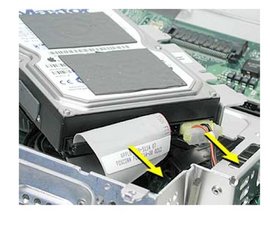 Note: These two pieces need to be removed when returning the hard drive to Apple service. 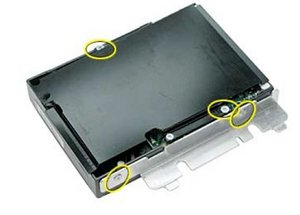 This product contains high voltage and a high-vacuum picture tube. To preventinjury, always review the Service Foundations: CRT Displays course for safety information.It can be found at: http://service.info.apple.com/service_tr.... Click on

Never use a grounding wriststrap until after discharging the CRT and setting up an ongoing ground connection.

Safety Guidelines:Whenever the rear housing of the computer is removed and before replacing a module,you must

1. Discharge the CRT (shown below) and remove the anode cap. 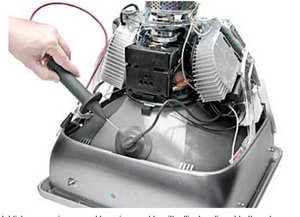 2. Establish an ongoing ground by using a cable with alligator clips at both ends.Connect one end to the anode aperture, and connect the other end to the metal CRT frame.

3. With the CRT discharged and the ongoing ground in place wear a grounding wriststrap to prevent equipment damage from static electricity.

Replacing the hard drive in the eMac is not easy at all and is not considered a CIP - "customer installable part". It has been years since Ive had to work on one of these but from what I remember you have to take the entire eMac apart. I do not recommend that you do this unless you have some experience working on them. Apple recommends discharging the CRT as it can shock you and/or implode and is dangerous to deal with.

Here is some info that I found:

Scope of soft skills increase day by day and numbers of opportunities are available in market to use these skills.This is one of best forum for young generation to enhance their skills and avail these opportunities.buy old gmail accounts

Gmail has turned fifteen years recent. And that is no April Fool’s joke. It debuted on one April 2004 and currently has quite one.5 billion users. To celebrate this milestone, Google has declared some new Gmail options. This got the USA at Pocket-lint pondering Gmail and our favourite options. So, naturally, we’ve rounded them up. Here square measure Gmail’s best prospects, in no specific order.<a href="https://pvawork.com''">buy gmail pva accounts''</a>