Help with identifying components on logic board

I had an accident and knocked off two compontents from my logic board.

Is anyone able to identify them and their functions?

The computer actually boots and seem to be working just fine

David Mann, give us the last three digits of your serial number. That will help to properly identify your computer and might narrow down the search.

The last three digits of my serial number is F91

Is there any way you can take another set of pictures at a higher resolution and focus. I tried zooming in on your broken components as well as tried to locate where they came from but your pics are too out of focus at the needed magnification to see enough detail.

David Mann, do these specs match your computer?

oldturkey03: Those specs are correct.

David Mann, so far this is what I got. The components that are off your board are U6880 and C6880. Both of them are part of the PORT B LEFT(HEADSET MIC) circuitry hence the "missing audio out from the headphone jack":-). Capacitor C6880 10UF 20% 6.3V x5r 603 package and the IC is a CD3282A1 possibly manufactured by TI. Still trying to determine the exact function and should get more information on this in the couple of hours/days ;-) BTW this part is also used on other Apple products i.e. iPhone 4 etc. as well as previous MBP's. 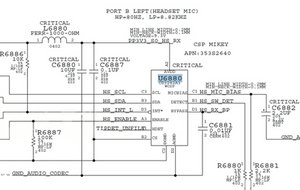 Your the man! OT

Amazing! Thanks a lot OT, and Dan as well. At the moment I'll be using a temporary solution with a usb sound card, and try the soldering job later this summer when I have the time.

It looks like you pulled of a BGA component (12 contacts) as well as a single SMD capacitor or resistor.

Looking at the iFixIt image of the same area and what you have I think you should have no problems re-soldering down the SMD cap/res it is located just below the larger block of contacts near the edge of the board using a small soldering iron and a set of tweezers to hold it in place.

As to the BGA comp, you might be able to re-solder it as well but you'll need to first carefully remove the silicon that covers it on the top Read though the post thoroughly before doing this!

Re-balling the logic board shouldn't be to difficult here as you only need a little solder to re-wet the pads (very little is needed here!). You will need a soldering iron (small) as well as a heat gun with lots of aluminum foil to shield the other areas.

The biggest issue is which way the component sits on the PCB. Before you pull off the silicon do you see any clues in the way the silicon is shaped (depression over the neighboring chips) when the component is placed back down on the logic board? If you can that should give you help. I would peel off the silicon on one side (with a razor blade cut across so you have quarters and mark with a marker one side you know is that side and the PCB with that mark as well) to see if a marker dot or corner is slightly different (pin one index). If you do figure out the indexed position marked on the chip you should be able to translate it with what you marked on the chip and logic board.

OT might be able to give you the chip info as he may have a schematic for this model. Let's see what he says before going forward.

Where can I order that parts name cd3282a1 wcsp. could you please show me?