Some claim to be "OEM" original equipment manufacturer in this case that would be Foxconn, I've contacted two Premium Service eBay sellers with very high reputation, one claims to be (100% OEM made by Foxconn) the other says that only Apple could get their supplies from Foxcoon.

If it is possible to get hold of the genuine article or is this another marketing term if not is there a way to tell a fake from OEM?

Have e-mailed Foxconn directly with query will post reply.

There does appear to be some consistency in pricing on all "OEM/original" digitizers of over £40/$67.41

Thanks once again for your time :)

1. The QR code. The one on fake digitizer is a little big and scattered. You can see the picture one. Black one is original and the white one is custom. 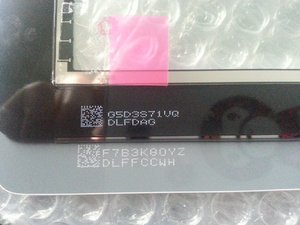 2. If there is a visible but can't feel ring around the front camera hole like picture two, it must be original one. And the fake one doesn't have. That's the most important evidence. 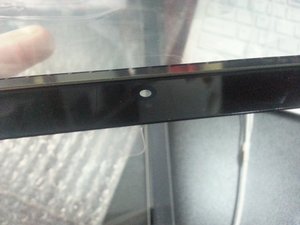 3. If you found there is the glue traces around the edge of the digitizer cable, it's likely the custom one. because the original one is manufactured carefully with original adhesive but the fake one is glued together. You can see the picture three. 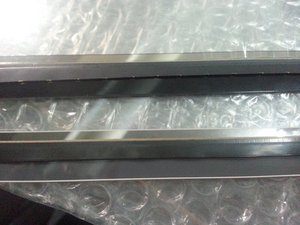 5. That also should be used with above comparison. Drop a drop of water on the surface of glass then move the digitizer, the drop on the original digitizer can move quickly but the one on custom digitizer will move slowly just like nearly stick on the glass.

6. The weights are different. The original one is heavier than custom one. For example, the original digitizer for iPad 2 is about 121.5g while the custom one is about 106.4g.

Hope can provide you some info.

You must get this all the time from the geeks like me, but I think I'm in love ;)

Kidding aside, simply an awesome in-depth reply with photos,

All I get from Google search results these days are paid/sponsored-search-results/ads.

Your help is greatly appreciated AAA*****

hey send me an email on a place to get oem parts. thanks. email is itronic2004@yahoo.com

Send for me too