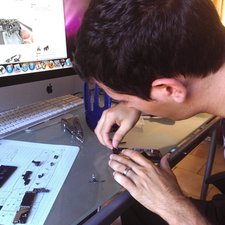 I saw that there is a similar subject on the site but didn't helped me as much as I'd have needed.

I tried to open my iPhone to replace its battery. It is a replacement iPhone so I guess that it's been badly assembled. The display literally broked up in two parts. Well, i changed the battery. Now, when I reassemble it, it doesn't start at all, even while on charge. But when I remove the damaged display (all the front assembly in fact, it appears in iTunes and keeps playing the charge sound every 2 seconds.

Do someone know what that repetitive sound means ? I'd like to fix it but I wouldn't own any new front assembly if something else is going wrong.

Thanks in advance for helping !

The sound indicates a damaged screen