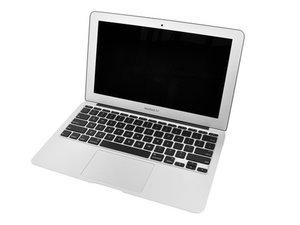 It won't do anything!

Can you give us some more background here. What happened before you it stopped working. Did you get it wet or drop it?

I really don't know a whole lot about its past... Someone brought the MacBook air to my job and offered to sell it to me cheap, b/c of it not doing anything... I did ask em if it had been dropped or gotten any kind of moisture (such as spills), & they said no. She said her brother always used it then one day it didn't turn on. I've had it for as almost a yr,no working.. I had one chance to charge it and left it plugged in for approx. five hours. It did nothing.. I had someone that knows more than i do bout comps. look at it inside and he said it didn't look like the motherboard was burn up or look bad inside at all. Just don't wanna buy a battery and charger and it never work.. but might have to..

Thank u for responding,

I don't think we can offer you much here as without any clues we could go to many different directions which could be costly.

If you can I would return the system and get your money back as that might be the cheapest way out.

If that is not an option, I would recommend bringing it into an Apple Store as they can diagnose the system as well as repair it.

Sorry this isn't much of an answer.

Christina, I do agree with Dan if you are not comfortable to work on your own computer. There are a few things you could do yourself. One would be to to make sure that your AC adapter works. After that, check to see if you get power to your I/O board. Use these guides to work on your computer.

I've spent a month on this little Christmas Vacation Project, to get it to work for my son who is in elementary school and needs of a computer for class activity where the chrome book comes up short.

I bought it knowing that it would "not charge" and would "not power on". But I did my research online and on Apple's support/community website to understand how extensive the issue WOULD be to determined if I should gamble and make this purchase with an inexpensive fix.

However, after a month of research, purchasing of a battery and two trips to the Apple Genius Bar (they are no geniuses BTW), I think I gambled and LOST!!!

A new battery from Amazon for ($70 incl tools) had enough juice to allow me to power up the MBA A1370 without the AC charger. I was able to see that it was a working computer. Shortly after seeing that the new battery allowed the MBA to power up without the AC charger, I put it on a charger, but did not pay close attention to the charging (or lack thereof) of the MBA or that there was an "X on battery icon".

My next focus was to resolve a "flashing question mark on folder when it powered up". So I went to the Apple Genius Bat (trip 1) for help with loading firmware and software.

While at the Apple Genius Bar getting new firmware and software loaded (no CD Drive and Install CD to do this at home), they ran a 'diagnostic test' via there net software and the battery was not detected. It failed. There was a read box over the battery during their diagnostic test (on the display of my MBA). The Genius Rep and I both brushed it off as my replacement battery from Amazon was not OEM, so perhaps the battery was being flagged as a non-OEM battery. He went ahead and loaded 10.6.8 on the MBA (while on AC charger) which resolved my "flashing question mark on folder" after power up problem.

When I got home and opened the MBA it didn't "wake up", which I thought was odd because it was working on and off the AC charger while at the Apple Store. So I placed the charger on it and completed the set up of the MBA. That's when I noticed the "X on Battery Icon" and the information listed in "About This Mac" showed that there was no battery "installed" and "not charging".

I researched how to remove the X on battery icon and saw that it could be resolved with resetting some things on the MBA.

Here are the steps for resetting the System Management Controller (SMC) that controls the way the MBA charges and acts under other situations. It did not work for me.

I've read other links where these steps (or a version of) DID work for some people. See links below:

So I went back to Apple Genius Bar about the X on Battery Icon and they told me that my battery was "probably the issue" and wanted to sell me a new battery. I told them that this is problem exists on both of the batteries that I own (new and OEM), so it has to be something else. But the "Genius" said that they can only do the SMC and PRAM resets and replace the battery with an Apple OEM battery, to know the next steps. And doing a reset in the store did not fix the problem.

So, we ordered the Apple OEM battery ($129) and I will be going back to Apple Genius bar for a third time to have them install it to see if this allows the MBA to recognize the battery and charge it ultimately removing the X on Battery Icon problem.

As long as you keep the MBA on an AC charger, it works. But it is not advised to do this since that is not how it was designed to work and you'll be screwed if you lose AC power for even a second.

STAY TUNED..... In about four days, we'll have the verdict back on whether the Apple OEM battery fixed everything. If so, I'll be returning my battery I bought from Amazon.

I understand this is an older thread, but I just had one of these in my shop for no power and no light on the magsafe charger. My customer to it to a local Mac retailer (no Apple store in immediate area) and they wanted $450 to send it to Apple just for diagnosis!!!

I was able to determine that the mainboard has some slight liquid damage to it. Toward the rear of the laptop an unused pop connector had slight corrosion on a couple of the leads. A few shots of QD Electronic Cleaner and slight scrubbing with a toothbrush to remove the corrosion was all it took to return the laptop to a working state.

Thank you my friend for taking the time to add your findings.

I had exactly the symptoms you describe and on checking found that the board had oxide/corrosion in exactly the same place.

I gave it a light scrub with a fibre glass pcb pen and connected the charger and immediately got a green light that changed to yellow charging and the MacBook Air booted on the start button.

Many thanks to you.