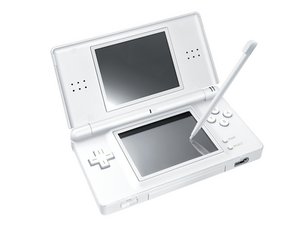 This Nintendo DS Lite was released in 2006 as the successor to the Nintendo DS. Getting inside this device is simple, making for easy fixes.

My DS lite was having display issues on the top screen. After reading online that it was most likely the ribbon cable, I took it apart and lo and behold, a small tear had developed along the curve in the cable. I bought a replacement screen w/ribbon cable and installed it this evening.

Both the top and bottom screen turn on, however the top screen is now completely white. The odd thing is, when I view the screen from certain angles (almost at eye level, with the screen flat towards the ceiling) I can see a very faint image of what should be on the screen. I have tried to adjust the potentiometer for the top screen but it has not resolved the issue. The potentiometer does have an effect, and from the extreme viewing angle I can see the image on the screen lightening and darkening a bit as I turn it, but when viewed from a normal angle it just looks white the entire time.

P.S. Is it possible to connect the ribbon cable upside-down?

EDIT: Problem solved! I realized today that I had mistakenly removed a very important screen overlay from the replacement upper LCD. I had assumed that it was part of the screen protector that had not come off (the replacement screen shipped with a thin plastic sheet stuck to the front of the LCD screen). When I examined the old LCD screen I saw that this overlay was indeed present. The overlay from the new LCD had gotten some dust/fingerprints on its sticky side, so I ended up removing the overlay from the old LCD and putting it on the new one. It seems to me that the old overlay is of higher quality (or at least the adhesive is), so it was much more difficult to remove, and I ended up with unsatisfactory results in the corner where I had held the overlay to remove it. After placing the overlay in the screen worked perfectly!