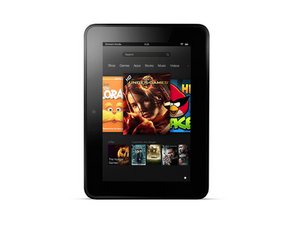 Updated version of the Kindle Fire 7" tablet by Amazon with 1280x800 HD display. Released September 2012. Repairing this device is straightforward.

Switches on but the screen does not power up

My daughters Kindle Fire HD will play the switch on music but the screen does not power up.

Any ideas would be gratefully received.

Has anybody resolved this problem, I have tried resetting still not working it is telling me date and time an to swipe with two fingers but screens still off, I have taken the back off and disconnected the battery an again still not working, I don't no what to do, I have had mine 4 years now first problem I have had, thanks x

I was reading on my kindle earlier and i left it on. Now it does’’t show anything. Though when i press the power button, it turns green and on charge it shows an orange light just fine but shows screen with just the back light and turns black again. Tried holding down the button, taking out and putting the batteries, and almost everything suggested online. Is the screen broken or its something else. Please help!

will mine does not work screen do not turn on

then turning on still doesnt work

If suddenly your Kindle Fire won't work, then it's most likely locked up.

However, sometimes when it locks up you can't tell because the screen goes dark, either gray or black. It just looks like it's off when in fact your Kindle Fire is on but is stuck.

This is usually why a Kindle Fire won't turn on or charge, because it's already on but is locked up and thus won't charge or work properly

How to Reset the Kindle Fire

Resetting your Kindle Fire is actually really easy, just hold down the power button for at least 20 seconds.

Unless the screen is black or gray, you'll know when it's off. If you can't tell, just be sure to wait a full 20 seconds.

When you're ready, hit the power button to turn it back on.

If your Kindle Fire won't turn on it's possible the battery went dead (if it was left "on" too long).

Plug in the power charger and wait about 15 minutes to make sure it gets enough charge, and then try turning it on again.

If it still won't turn on, try to reset the Kindle Fire again to be sure it's powered off.

I got it working right away. Thanks.

imma try in and hopefully it works, ill let you know

Omg thank you so much... This helped my amazon fire to restart and work right away.. Thanks once again.. BTW I had to created acc just to post this. Lol but it was worth it ..

Works! Yay, thank you so much. I thought it was dead and could no longer get a return.

Worked for me too! Thanks

If you see a black screen or if your Kindle is unresponsive, it may be out of batteries. Try charging your Kindle for at least one hour. ... If your Kindle’s battery is completely drained it can take up to 15 minutes before it reacts to being plugged into power. If you have any problem then call me.

My Kindle working. Thanks

Thanks @bravomarshal , this was helpful for me.

Thanks for the useful information. It's working for me.

My Kind fire screen does not power up but this is working. Thanks Marshal

My kindle is running fine now. Special thanks to the support.

Hi Emilee, the only thing that worked for me was removing the battery and putting it back in. It's taped in and looks like it's not removable. I removed it anyway because I was fixing to just toss it out since I couldn't get past the black screen. AND I TRIED EVERYTHING BUT, prior to removing and re inserting the battery and its what worked, surprisingly!... Good luck.

How did you take the battery out safely? When I went to try to get mine out, the battery seemed to deform. almost like it's bendable.

Please watch youtube video on how to disconnect battery and connect again and it does work!!

# If a Kindle neglects to do anything it might be totally discharged. Check that the charger or cable should not be faulty. A Kindle Fire significantly requires more current to charge it. Charge the Kindle for an hour or two and take a stab at driving it up.

I freaked out once the tablet went to a black screen from leaving it on. I knows it had plenty charge as it was over 70%. I read the posts and the method that was successful was to hold down the power button 3 seconds. Making sure it thinks is on. Then holding down 30 seconds or more (10 second method doesn’t work). As soon as the screen flick and showed fire, I shed a tear and kiss the tablet. This tablet fires my heart. Talk about material fellings lol.

Then it read updating storage device. Anyway This point the tablet was alive and save me from being bored waiting for my flight.

Until next time. Chao!