Got a screwdrivers set from iFixIt and was happy user, fixing office MacBooks, iMacs etc.

Among other Mac stuff, recently was opening Air Early 2014 by using P5 Pentalobe bit. But today I was trying to unscrew MBP 15" Retina Mid 2014 and found out that P5/1.2 bit from a set doesn't fit! How is that possible? The bit itself just doesn't dive into the screw, staying above. 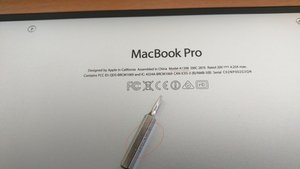 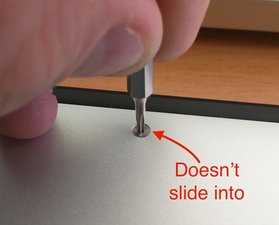 This bit was not out when I've bought the three sets I have. So I use the screw driver. But take a look at the tip and see if has any burs on it or is manufactured and marked correctly.

Weirdly, but the bit is marked P5 and separate screwdriver, as well as a screw, are P5 too. Moreover, what about Air then? I was able to use supplied P5 bit to crack into Air unscrewing to its P5 screws.

P.S. Got 54 pcs kit about a month before above mentioned laptops, I presume it is recent one.

Look at the screw and the bit does the screw have a pin in the middle? And does the bit have a hole to allow the bit to insert over the pin? This is a newer Torx TR6 screw. Here's the needed screwdriver IFIXIT TR6 Torx Security Screwdriver

@Dan, it doesn't and has only five points on a star, this is a _definitely_ P5.

And yet it is quite late response, recently I had to open another Retina laptop and was able to do that with P5 from above mentioned set. My observation is that P5 in a set has sharp points while Pentalobe itself has rounded points on a screw. This may lead to push bit a little more than usual to get it into the screw. I'm not sure this is the most correct way but somehow it works. At least on Retina 2012 and Air 2012 this P5 bit works flawlessly. But not on Retina 2014.

Same here. I have the refurbished macbook pro retina 2013 Late. And P5 doesn't fix. I guess P4 could fit but I can't find any P4 online.

Just chiming in to say that my P5 Pentalobe Screwdriver (from this set: [produit lié absent ou désactivé : IF145-239-1]) doesn't fit my rMBP 15" (Late 2013) either. I was able to root out two screws with a lot of force before giving up on the rest.

Well here it is 2016 and have run into what everyone else is talking about in this forum. Attempting to replace my wife's HD but can't find the proper driver to remove the 10 screws on the back cover. Some have said it is a 5 point drive others say it a rounded 5 point driver (if that makes any sense) and yet other say a T4 is needed. So my apple has succeeded in befuddling everyone as they intended.

Can someone clear up this mess and steer me at the tools set needed here. Surprised Ifixit doesn't jump in here and answer these questions so ordering the right kit can be a solution.

Having the same problem as the previous two posters.

I used some finishing sandpaper (and swearing) to get the P5 driver to fit my Macbook Pro. After that, worked like a charm.

I know this is about 4 years since the original post, but this came up via search, so maybe others will find this helpful.

The T5 screwdriver doesn’t open the bottom case. You need P5, PENTALOBE, to open it. They’re different from each other. iFixit’s product is here: P5 Pentalobe Screwdriver Retina MacBook Pro and Air

You also get the P5 (and T5) bits in the Pro Tech Toolkit.

There is no single reference to T5 in either my original question or any answers.

Did you find a solution Ajax? I am having the exact same problem on a late 2013 a1398. I also was wondering if there is such a thing as a P4.

Guys. Here is the deal. I have been opening macbooks and macbook pros for at least 7 years now.

4) Y0 (This is a tri point screw driver allowing to open the battery screws. very handy)

Here you have it. Take it from a pro…and again…don’t let anyone bully you or confuse you. Try to think about T4 and T5 rather than P5.

There are other T3, T6, T7, T8, and T10 screw drivers that you may or may not need depending on what Apple components you will need to open (e.g. the hinges screws use T8 where as iMacs may need T6 as well as T7)…if you happen to have extra $ and able to get hold of the entire T set….from T3 to T10….it will not hurt to have it. For iPhones and iPads there are other type of screw drivers and that is where the P confusion is coming from…for example P2 or Pentalobe 0.8mm is a very important screw drivers for opening iPhones as well as Y000 or tri point 0.6mm. Also the screw driver Y00 is almost = with PH000 and you should be able to get away by using either one.