I have clear the data base, unplugged the PS4 and I am out of ideas. Any help?

I'm having the exact same problems I tryed a DVD it worked then a couple of try's later a PS4 game worked check it reads DVD if so it thinks the bluray ain't an original and can't support it..I'm going to try unplugging for 24 hours then il update again...

I tried the method I saw on you tube but soon realized that I had a 1200 series unlike the one in the video mine had 2 screws and a different disc drive completely. Is there a way to fix the 1215A model?

Nvm. Fixed it like the day after I posted. Was pretty simple. Works perfect now.

What was your problem I'm having the same

I'm trying to play GTA 5 its installing only 30% then says unable to read disc . I went a month with out playing my game but it still doesn't work right now it's on 14% later on it's going to say disc not recognize happens with all my other games GTA , call of duty black ops3 , and uncharted 4

After reading posts and saw videos on you tube I decide to open the PS4 and inspect the drive unit.

One thing that I remembered was that the last disc I insert before the PS4 dont take any more discs, was a dvd with a sticker on it. Well, when I open the drive unit SURPRISE, the label of that disc was stick on the spinning part and it blocks the laser from reading correctly the discs.

I remove the sticker, clean the glue and reassambly all the ps4 and It works.

Now I can play movies and games normally.

Thanks for your help 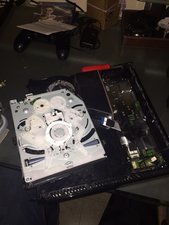 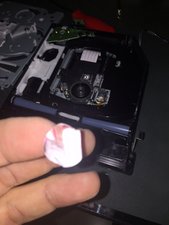 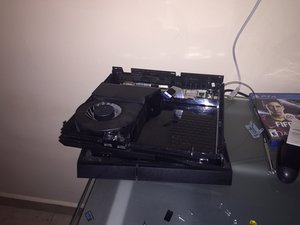 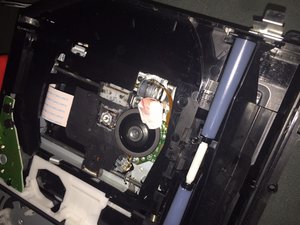 It simple really. The Laser of the Blu-ray has actually two lenses/lasers/LED's. Both need to be cleaned by an eraser and then by a Q-tip with 91% alcohol. The first thing is to open the PS4 up and blow it out with air from a Air Compressor to reduce the dust, heat , static electricity that dances all over the place because of the dust! Not only does the dust contribute to the items I just wrote above; but it also causes tiny electric arcs if there is to much dust on the circuit board too! Remember to first blast the inside with air from a Air Compressor then clean the lenses with an eraser gently, then use alcohol on a Q-tip on both the lenses and metal contacts and blow it all out "again with air" from a Air Compressor! The air from the compressor should dry the 90% or 91% alcohol so that there will be no shorts. That should be it! If it doesn't work you can try to adjust the servo that regulates voltage to the lasers instead; but that could fry the lasers out reducing the PS4 to junk! Good Luck!

Tap on the top? U guys need to realise that tapping doesnt always work not for me and not for everyome. It used to work for me but it now it sounds like its reading the disc, then it goes back to the same noise and same problems. The only discs my ps4 will read is games and blu-ray disc. But any other normal DVD i have at home doesnt work. Which is funny considering it could play any movie i had a couple of months ago and i blame sony, because as soon as i updated the system is when this stuff starting happening . And before you ask ive already done all that safe mode updates and stuff but NOTHING works. Ive taken the ps4 apart in case there was a sticker, but no sticker. Im at the point where im considering changing to PC. At least i can watch a %#*@ movie that way.

But how do I take apart the PS4 to check if there’s anything there?? The pictures don’t help

FIX! I had the unrecognized disc problem for a while, tried all kinds of fixes and methods I found online and nothing worked. Until I found a fix that worked for me every single time.

As soon as I enter the disc, I start to tap semi-hard on top of the ps4 around the area where the disc is until my playstation reads the disc. Works every time. I still have unrecognized disc issues if I don't tap on it.

Please let me know if this works for you guys.

This is a repost just in case someone didn't see my answer. Some people have told me it worked for them.

That worked! Thank you so much!

Wtf bro? I tried everything but this stupid idea worked

Yeah, worked for my friend’s PS4 that had been doing this for years! So surprised it worked. You can hear the disc begin to spin with each tap..

OMG - thank you SOOO much!!! :D I was freaking out because my PS4 Pro I bought is just barely a YEAR old!! I was so worried that I was gonna have to have the HD replaced and it was gonna cost me a fortune!! Thanks so much- this fix is so EASY!

Reading all these comments from this post and the first answer and seeing it work for you guys is awesome. I'm glad it has helped you play your games with such a simple solution.

This is a fairly common problem with PS4's. You'll need to replace the drive or the laser at a minimum. Usually just replacing the laser will fix this issue, but sometimes they need the entire drive replaced.

My problem is that my PS4 won't read blu ray disks, both game disks and movies. I've tried reinstalling the current update and rebuilding the database, hasn't worked. When I insert a blu ray game or movie, PS4 rumbles and spins for a bit, then stops, then repeats several times until it says unrecognized disk. I'm left to think the laser or disc drive needs to be replaced. Any idea? Thanks

I have had this issue and the only thing I have been able to do is eject the disc then restart with the disc ejected. It then will start spinning and if I launch the game directly after doing this I can play the game without a hitch. However if I put it into rest mode it doesn't always come out of it. If the game gets suspended it will not always play afterwards. Say I stop to watch some netflix for a bit and come back, it just doesn't want to read anymore.

No no no. this system is brand new. It has Nothing to do with the lazer.

David you are a saving grace sir. I feel like im back in the PS2 era trying to play GTA III smacking my ps2 to avoid the red cubes from popping up! LOL!

This worked. I tried everything else first, short of replacing the drive. Thank you.

I had a problem where when I put any disc in it would chug a bit then sound like the disc was being relocated then chug a bit more. After this I’d get a pop up saying unrecognised disc.

I tried many things. First I tried completely dismantling my pro to get to and clean the disc drive lens, but it already looked pretty clean and that didn’t make a difference.

Secondly I tried forcing my pro to update in safety mode to rebuild the database as I heard that could help, but again it didn’t.

Next I began messing about with applying pressure above the disc drive with my hand (squeezing the front and back together) as I inserted the disc as some people suggested knocking on the console. This did help often but not 100%.

Lastly I changed my PS4’s orientation, I have mine vertical by default as I have limited space. I changing it to horizontal, this didn’t really help. But turning it upside down vertically 100% fixed my problem. It now reads discs quickly and quietly 100% of the time! I can’t believe something so simple and honestly a little bit stupid has worked so well. Give it a try yourself!

as i mention above.. please unplug machine. Put upside down for 24 hours horizantally. After 24 hours test normal horizantal way that discs are readable or not. Playstation Pro, first generation have some problems if vertically placed and slowly fall. If you ever place your playstation vertically it maybe the reason. Mine fixed that way. Use it horizantally. I do not know new version fix that issue or the vertical panel optinal has any good, i used vertically without panel

Thank you! Old trick from ps1 days.gentle tapping worked after 3 goes. Saves a clean for now. Thank you

well i tried tapping but it didnt work ... can somebody show it in a video or something please

Bought all new parts inside the ps4 pro because it wasn’t reading a dics after a small fall to the floor, it wasn’t anything high up from where it tipped over from but after that it wouldn’t read anything.. like I said I’ve replaced the drive, and everything inside, did updates, to even shutting down and restarting, still nothing :( still won’t read dics of any kind, does anyone know what’s going on know?

The guy above you said its because of the update 9.0.3. Ive had this problem like a few weeks after the system update i still do and its driving me nuts im having my cousin check it by looking at the laser and disc drive

Sense the new update 9.0.3 released sony forced the ps4 consoles to not read the disc’s but there is an selution make your ps4 stand vertical boom issue solved hint get a stand ;)