Where is CMOS battery on Toshiba Satellite L55D-B5364

This model of Toshiba Satellite lacks an access panel on the bottom of the laptop, so I removed the bottom panel of the laptop. However, nowhere on the motherboard can I see any coin cells that would identify the CMOS battery for me. I checked under the RAM and HDD, and there wasn't anything there, either. It's starting to look grim. Either it's under the blower, which seems unlikely since clearance would have to be nil, or, ugghh, it's on the top side of the motherboard just underneath the keyboard assembly.

Toshiba support refused to give me any information regarding where the CMOS battery is for this model, which I thought was in bad form. It's out of warranty, I need to replace the CMOS battery. Why should I have to move heaven and earth to do so? And no information forthcoming from the manufacturer?

Has anyone ever changed the CMOS on one of these? It's only about 2 years old, so I wouldn't have thought the CMOS could have gone bad. I've had them last 10 years in my desktops. Is the top bezel separable from the keyboard on this model? This model is a bit different in that the top bezel has holes cut where the keys protrude from, so there is no panel to remove to expose the keyboard and what lies beneath without removing the entire top panel, if that is possible. I hope that this isn't where other manufacturers are going in the future. Really terrible design. It's almost as if they tried to make it as difficult as possible to do any maintenance on this machine. Almost...

The CMOS Battery is soldered on the motherboard and looks like a silver button with a blue rim around it. It is located on the bottom and to the front of the laptop.

This pic just shows what the battery looks like... 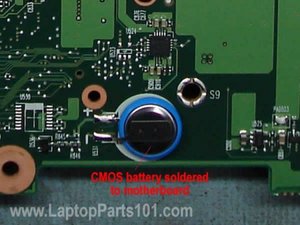 Thanks for that. Are you sure that it is on the bottom of the motherboard? Could it be on the top portion of the board underneath the keyboard assembly? Did this pic come out of a L55D-B5364 or a similar Satellite laptop? Sucks they felt the need to solder it to the board. Can I desolder it from the board and replace the battery? I have decent soldering skills.

No, That pic is just to show you what the CMOS battery looks like, They use that same battery in many different models. If you already have the bottom cover off, then if it's on the bottom you should see it. Yeah, It's easy to remove and replace. 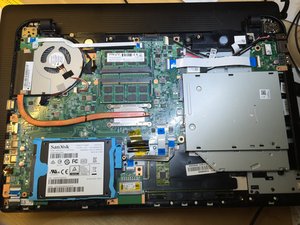 This is what my motherboard looks like after removal of the bottom panel. I don't see a coin cell on here. Perhaps it is hiding under the cooler or it's on the top side just under the keyboard. What do you think?

Yeah I don't see it, it's got to be on the other side of the board...If you don't see it after removing the keyboard, your gonna have to lift the motherboard out.

I have an L55-B5294 which is similar to the picture above and I can't find the battery, either. I've pulled the mobo and even the power switch and Ethernet boards....nothing! First time I've encountered this problem. There is a connector by the cooling fan connector that doesn't have anything connected (like the picture), but don't see that as the issue. Any other suggestions?

This model have no "CMOS" battery probably. All data are in flash memory that don't need this battery to keep data.

If there is no battery, then how do I resolve the error message "RTC battery is low"?

the main battery acts like a cmos battery…. so if that one drains out then replace a new one.

I'm working on an L55-B5294 showing the "RTC battery is low" notification. If you ask me there is plenty of room in the case for a normal CMOS battery. Using the main battery to power the CMOS is a really stupid idea, Main batteries often sit around totally discharged. In reality this kind of non-standard approach just makes it difficult to repair your own computer, actually it makes it a lot more difficult, which may be their intention in the first place, but add to that their refusal to share ANY information that could help someone repair their own computer and it is starting to smell like Apples around here. For whatever it's worth I will add Toshiba to my list of computer companies to avoid and, yes, Apple is definitely on that list, too.