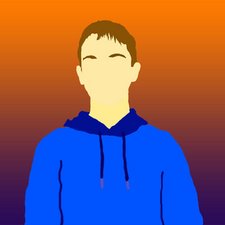 My iPhone 5 screen doesn't turn on, but the phone connects to iTunes

For a couple months, my iPhone battery has been slowly expanding from the gas inside. I should have replaced it a while ago, but I was not aware that the battery was the problem until probably too late.

Finally, a day before I was going to replace the battery, I shut down the phone and it didn't turn back on.

What is odd is that the phone worked fine until I restarted it, and now the screen doesn't work. I assumed it was because the battery had finally met its demise, so I went ahead and switched out the battery (which was severely bloated) for a fresh one.

The phone still refused to turn on, so I plugged it in and charged it for a couple hours. Still nothing. I plugged it into my PC and noticed that iTunes still recognized it as my phone. So I did a hard reset by pressing the home and sleep buttons at the same time, still nothing. I went into recovery mode, and iTunes recognized it as such, so I wiped the phone from iTunes to see if that would work.

Frustrated, I opened up the phone and disconnected the display ribbons, then plugged them back in again and closed the phone again.

Nothing seemed to work. I feel like I have tried everything in my power. Is there anything else that I can do, or is the phone doomed?

Currently the phone is able to switch on most likely but no display.

Can you confirm there is no display on the screen by checking if the screen shows a very dim display when iTunes detects the phone?

Whats The Error U were getting ??

Ben: The backlight is completely off

From your description I assume your screen is totally gone.

When batteries expand, they very often lift up the screen, pushing it out of its plastic frame, and in many cases damaging the screen assembly until a point of no return.

I suggest that you get your hands on a screen that you know is 100% functional, and try your phone out with that new screen. If it works fine, then your screen is damaged and needs to be swapped out, what I strongly suspect is the case.

Yeah, that's what I thought. I will probably stop by the phone repair shop and see if I could get my hands on a full screen assembly.