What part of my display got damaged?

I spilled coffee over my 2015 MacBook Air last summer. Apple told me everything was messed up, but after disassembly I cleaned everything with alcohol and got it back to running. However, I did not remove the display when I cleaned (soaked in alcohol) the keyboard. Stupid me... The display must have gotten in contact with the liquid and now it looks like this. 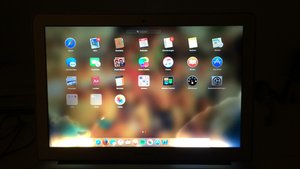 What is it that I need to exchange for the display to be normal again and where do I get it? Is it the lcd?

Apple resellers won't sell parts to me and won't repair it, since I opened it myself and lost warranty - which I lost due to the water damage anyhow...

Thank you guys so much and regards from Germany!

Sorry, maybe I should have described what I meant in more detail. On that picture it should be clearer though: 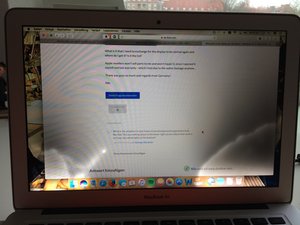 I am talking about both in the left and the right corner. There is more brightness and you see "blurry" changes in color intensities. You can definitely see a line that goes from e.g. the right third of the bottom of the screen in a quarter circle to the middle of the right part of the screen. It's similar on the left.

So I think something with the background light is wrong. Or is it the entire LCD? I don't know too much about displays, my apologies.

The entire computer is still usable. Also the display works fine, it's just quite annoying and I want to know if I can fix it somehow.

The backlight sheets are contaminated.

Apple manufactured MacBook Air's display very differently from standard laptop LCDs. It is very difficult to open them up without ruining it, so just replace the entire top half.

I dont think it is very hard to replace the lcd only if you have a new bezel with it.

Gigabit878 George. Your statement is total BS. Find me anywhere where this display has been successfully repaired.

Mayer, actually this is possible, I remember seeing Louis Rossmann doing LCD only replacements on these displays.

However this is difficult, Louis whined all the way through as usual. LCDs may be available somewhere but I'm not sure about the backlight sheets.

@tomchai I have not even been able to find the parts for under $220. I think @reecee said he might have attempted it in the UK.

@mayer yup definitely possible, Air 13" models are probably my most popular screen repairs. In OP's situation though, the backlight sheets are damaged by the liquid, best to just swap the whole lid or live with it.

wow considering that you spill liquid on your computer you did an incredible job of cleaning it and getting it back operational. the issue could be with the cables maybe some got damaged? the port where it connects, or even in the screen itself. i would count my blessings though. you said that it is just annoying and i understand that. but this may be the best you are going to get considering the circumstances. but yeah check the cables and the port first to see if there is any damage there first. once again good job on making it operational again. and i hope what i have wrote helps a little.

This is a great example of one of the many pitfalls of liquid damage repair DIY. IF the liquid behind the screen is only alcohol it will likely evaporate over time leaving a less noticeable residue. Replacing the lcd canal is not for the faint of heart, I would recommend buying a donor machine from eBay with a functional LCD. Good Luck!

I think you're right. It has been evaporating already noticeably! I compared the stains to older pictures and they have gotten less visible.

Do you have an idea how to speed up the process? Can I use a hair dryer?

I know, it would have been smarter to have brought it to someone, who absolutely knows what they're doing. This was when I lived in Switzerland however and Apple rejected me, just like other stores who offered repairs. So I was basically on my own. Also in my hometown in Germany every store I mailed, declined any repairs on a machine with a liquid damage...

Is there something you can recommend for me to do to increase the speed of evaporation?

I have seen these dry somewhat, but it is rare for it to dry completely (unless it is a tiny amount). To be honest, I think what you are seeing on the screen now is what it will look like, since it stains the backlight sheets themselves. Even if the screen is removed, you can't really clean a liquid damaged backlight sheet.

Backlight sheets is 10000% correct, no easy way to resolve this. Is it doable? Sure but on a scale of 1-10 MacBook Air LCD/Backlight Sheets replacement is a 13. Allow it to evaporate and deal with the result or replace the clamshell display.

I have a MacBook Air 11” and mine also had these marks, but i took the whole display apart and it looks like the bottom led’s that illuminate the panel are broken (those are soldered to the lcd sheet)

you are better off replacing the lcd assembly completely and that’s it.