Rear camera opens to black with yellow exclamation mark noting phone is too hot. This is after fresh boot and phone is cold to the touch. Flash, flashlight do not work ever. Have done a DFU restore and have reseated all cables. Battery drains quicker than you'd expect, possible short? After a while the camera/flash area of the phone gets hot.

User reports that it took a tumble off a roof while it was in an Otterbox Defender. No signs of physical damage outside or inside, and this camera/flash issue popped up months after it was dropped. Could be unrelated, but maybe not.

Should I replace the rear camera or is there some other component or repair process I should look at?

Edit: it was the camera. 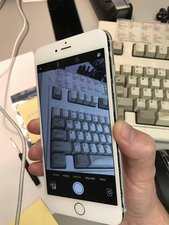 try the camera first, if that does not fix it replace the power/flashlight cable.

It was the camera. Thanks stranger!