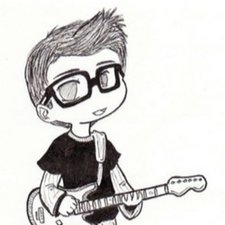 Hey guys. Just fixed a Iphone 7 screen. Normal process of moving over the front camera flex, speaker, lcd heat shield, and home button. Well when I finished it and pressed the home button it starts vibrating rapidly and opens recent apps. Nothing looks torn or bent so I dont know whats wrong. Any suggestions?

Any update on this issue? I am seeing this issue multiple times on iPhone 7 and 7 Plus. Some of the phones have the issue before I even open them up.

I am facing this problem. Replaced 5 lcds , different suppliers also, also checked with genuine refurbished lcd.after that gone to settings -general-home button-there is 3 options.try all.even slow speed as well...no luck at all..

Now once press hard and working few minutes good and after that same problem.

my taptic engine had come loose cuasing the clicking noise, simple fix for me, hopefully the case for others.

I’d check the Taptic Engine to make sure it is secure and make sure everything is grounded properly. Also, go into the Touch ID settings to see if that has any impact. Good luck!

How do you do that? Is there a guide?

Taptic engine is right above the charging port. Some are labeled : Taptic Engine some have black tape on them. Home button setting should be under Accessibility>Home button

The question was rhetorical to get you to give a more complete answer.

Bump... One year later. Any solutions to this issue? I have seen multiple iPhone 7's with the same issue - An overly sensitive home button.

Hello, i faced this trouble twice in a week with two different iphone7 with very badly damaged screen (and one with water damaged). They have been previously opened so i don t know if i did the mistake at least for one but for the water damaged the trouble was already present: the flex cable from the button (not from the touch id) is cut near the grounding pad 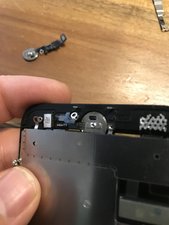 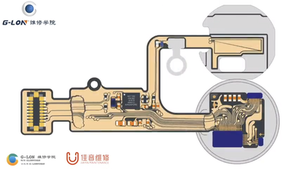 as a capacitive sensor the button sensor is driven using specific pulse to sense the capacity change due to finger: with the track cut… it sense using the second half of flex board. Most of such circuit have a automatic calibration mode and without real sensor area, the button become crazzy. I will try two have my button repair in microsoldering surgery…

Best of luck to you! That cable tends to tear when over tightening the screw for that anchor. Easy to tear and extremely difficult to repair. I haven't had luck with capacitive touch working after such a repair. Let me know if you have better luck!

Have the sama problem. Did you find a way to fix it?

I had the same issue with an iPhone 7 on which was doing a back case swap. The original phone was badly damaged and the case was bent. I had ordered a new back case and swapped the motherboard and other parts. The touch ID works , but the home button would sometimes multiple-click. After trying different screens, swapping the taptic engine, I put the home button under the scope and found the slightest wear/tear on the cable where it folds in half. I’m guessing that’s what is affecting it. 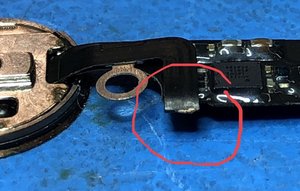 Do you have another screen assembly to test with? It could be a faulty screen. I would also go back and reseat any connectors, and make sure the screws holding in the home button are not overtightened.

the u10 chip has been damaged remove the cable with heat

Are you sure this is the issue? I have replaced the U10 (Turtle) IC before to try and remedy this issue and though it usually no longer clicks repeatedly the button is still so sensitive that if you barely touch the button it "clicks".

This is an issue with the haptic engine. Anything from minor bending or an unsecured connection and cause improper communication from the home button, to the haptic engine. If all is secured and well. You will need to replace the haptic engine. I have had to complete this repair several times. Fairly simple and a kit with tools can be obtained from amazon for about $25.00 There are severa turorials on YouTube for this repair.

My home button if clicking by its self is so annoying!!