Hi guys! Today I noticed strange metal noise when I was typing or moving my MacBook. After removing the back case I saw a small screw. Seems like it 1x1 mm 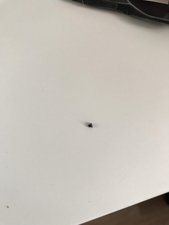 I tried to find place where it belongs, but everything looked good. (I removed only the back case and didn't unscrew other parts)

Can anyone suggest where it should be?

On the 12" Retina models, they use tiny pentalobe screws like that one to secure the keyboard in. Haven't had to replace the keyboard on this model yet though, so I may be wrong.

I would help if we knew the type of screw, (torx or Phillips) and the length.

@mayer - did you look at the screw in the link? I tried looking at the teardowns I couldn't spy where it came from given the limits of the images.

It is pentalobe screw 1-1.5mm length.

See if it matches the bottom cover screws.

As to where it came from I would guess given the screws shortness it held something thin like a shield or ribbon cable connector. As the system is so new I doubt anyone has clue other than Apple. It's also possible it's a rogue screw that found its way into the system during the manufacturing process.

Either live with things as they are now or visit an Apple Store to talk with a genius. Explain you heard a rattle and just popped the cover and the screw just fell out. See what they say.

Same thing happened to me when I removed the backplate. Doesn't change the functionality of the laptop at all