What logic boards from other models will most closely match A1229?

My power adapter recently started acting up and it unfortunately caused a power surge of some sort and now my laptop does not power on or make a sound at all when using the power button. I tried shorting the power button, with no luck. I then removed the logic board after testing the input voltages coming from the I/O board (16.5v). This was after repairing the MagSafe charger.

I plugged the logic board and felt for hot spots after letting it sit for a few minutes. I almost instantly found an extremely hot spot. It seemed to be coming from a very small capacitor near the power I/C. I gave the chip and capacitor a little nudge with my finger and POOF!...glowing red power I/C and smoke everywhere. I immediately unplugged the board before the logic board itself was damaged. I don't believe a simple nudge should have caused a good chip to do that!

After looking at the schematic, I believe the chip is ISL6269bcrz or something of the sort. It is a very small square chip with 7 pins on all 4 sides.

Could the capacitor that I thought the heat was coming from have been the problem or both? How many more components in that area may have been damaged?

I have been looking for an exact match for the logic board on ebay for less than $15, but I can only find boards from around the same time period and for 15" models. Where most Macbook and Macbook Pro models made using the same components for the power circuit?

I could order the chip on its own for $5 but it would be nice to have a logic board that contains multiple spare parts in case of future failure. I have no experience soldering chips, especially ones of this size, but the proper equipment is on its way and so is a brand new unbuilt gaming PC (goodbye Apple), well Apple hardware that is...

The capacitor that was extremely hot is the one directly above the top right corner in the first and second images, right underneath the H-bridge. 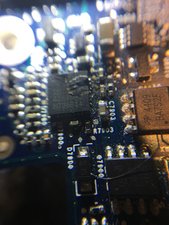 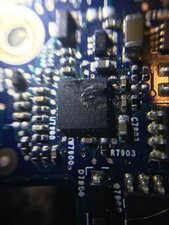 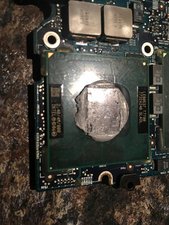 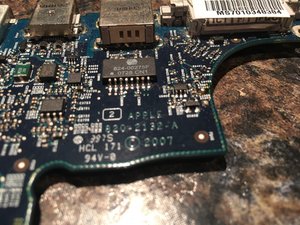 Pictures have been added, including a picture of the LB number.

@mckay420 that is a very good question. Problem is that it will not be easy to answer. It would really help if you give us the 820-xxxx number from your logic board. Then post a couple of image showing your board and the location as well as the particular component that shorted out. Use this guide Ajout d'images à une question existante for that. That way we can see what you see.

Where most Macbook and Macbook Pro models made using the same components for the power circuit? Yes but the layout is different and you will need a schematic/boardview of the board you get the parts from to know where it s located. It is most likely possible to find a board for parts, but you will not know if the parts you need are working. Nothing more frustrating then replacing failed components with faulty ones.

" I have no experience soldering chips, especially ones of this size, but the proper equipment is on its way" you do want to practice soldering first. Board level repair is not something to pick up by reading about it or watching video's. It requires skill and practice.

I’m not too worried about messing the board up, as I currently have parts on the way for a gaming PC. (Sorry I have to brag) z370 Taichi board, i7-8700k CPU, 2x8gb corsair vengeance RAM, 2x250gb Samsung 960 EVOs, 34” Asus monitor, and hybrid cooled Geforce 1080ti. So yeah this will just be practice and hopefully I can get it right. I have a magnifying headset, a Hakko soldering iron, and a heat gun.

I believe it the faulty circuit is the “one wire” circuit. It failed as I was trying to use a faulty charger. The battery still charged, but the light stayed green and the computer would not turn on. I will reply soon with a link to a loguc board that looks similar to see what everyone thinks. Thank you for the replies!

I guess instead of posting links to broken logic boards, I’ll just ask this...if I want to replace, say, a capacitor. If I find another capacitor or the exact same size from a similar macbook, will it have the same properties? Can microfarads be measured accurately without power to the board? Are there other components that can only be measured with power or separated from the board? I once heard resistors can only be measured disconnected from the board.

@mckay420 in reality everything should be measure while off the board. "or the exact same size from a similar macbook" you will not know if it is the same component unless you either have the same board or at least the schematic for the donor board if it is different. You use a capacitance meter for capacitors off the board but an ESR meter for the once that are still mounted,. I use a pair of Smart Tweezers for that purpose. Makes live easier and I do not have to guess.