Laptop won't turn on at all

My mid 2012 (820-3115-B) 13 inch MacBook Pro won't turn on if I press the power button - actually, I've not been able to make it power up at all. This has been a faulty computer for a while and I have first observed issues after leaving it untouched for a year. It would then eventually power up, but would take some time to do that again in case it was shut down (Laptop won't turn on for half an hour if turned off). It remained in this condition for quite a long time and, eventually, it stopped working, after sitting untouched for a good couple of months after the beginning this year.

I have tried to:

- Open it up and clean all the components

- Any one of the possible key combinations that will reset SMC, PRAM etc

- Use battery only (indicated as charged by the green LED indicators

- Use PSU only (by disconnecting the battery from the logic board)

- Power up with multiple (and no) HDDs

- All the possible combinations of my two RAM units

- Power up without the DVD RW unit plugged in

I do, however, think I might have found the problem. There is a (very) rusty component in the logic board which, as far as my research went, seems to be a power inductor of 4.7 uH that should withstand up to 9.5 A. Since the issues started to happen after the computer was left untouched for a very long time - in a brazilian city with very high humidity and close to the sea - I wouldn't be surprised to see this rusty coil causing the problem. Please have a look at Identification of Logic board part (Picture attached) 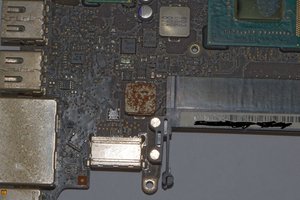 I have checked the schematics of my logic board model, which is not exactly the same as the one from the above question, but also contains the L7030 coil (component: IHLP4040DZ-SM). What I don't know is what exactly this coil is used for - I suppose it has something to do with supplying power to the system, since it seems to be part of the J30 Power System and lies right behind the "PPBUS_G3H" line.

Could you please give me more information on this component? Do you think it could be causing this power up issue? Can it be shorted out? Can I simply replace it with this? What about the L7040 fuse, located close to this coil? Could it also be damaged? Where exactly can I find it in my logic board? Can it also be easily replaced?

Also, there is another pair of rusty components which lie north of the logic board but don't seem to be in a very bad situation: 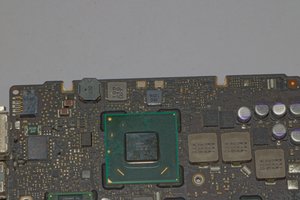 I haven't been able to find out what those are. What do you think?

A couple of other pictures of my board, for the sake of consistency: 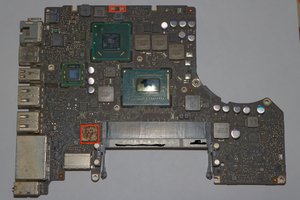 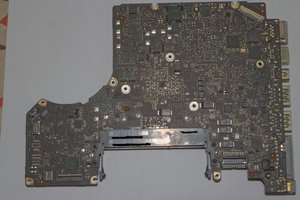 Adding undoctored images which are kind of affected by my camera's flash but should look more realistic: 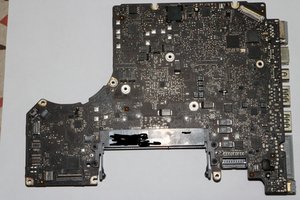 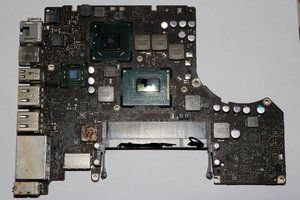 Your logic board does not look good ;-{

Lots of dampness damage! If you compare it to this board here you really can see the difference! logic board view.

Many of the solder joints look corroded besides the rust on the steel cans and the Ferris body of the coil your red box outlined. While replacing the coil might get you going this board is teetering on failure soon.

Hey, Dan. Thanks for your response! I think the board looks odd because I have post processed the pictures to make things easier to see. That's why it looks grayish. Can you confirm that the coil I depicted is indeed a 4.7 uH 9.5 A one? What about the fuse I mentioned - could it be replaced/tested? I would really like to find out where exactly it is.

Post an undoctored image. I don't think that's the issue

Added the unaltered images, Dan. They are just kind of affected by my camera's flash but should look good enough.

Well I'll agree the pics are a bit better. Sadly, it still looks like dampness damage around the power connector area of the board. I see a lot of joints that just don't look healthy. I'll need to check my board view and schematics to check the coils specs.

That coil is where power passes through to the fuse F7140 to the system for PPBUS_G3H the main 12.56 volts rail in the computer. If you have no experience doing component level repair, you should send it to a specialist (peep bio for help). My guess is maybe a current sensing problem in the PPBUS circuit, but it's hard to tell without looking at it.

Hey, Brady. Thanks for the response! Do you think this current sensing problem could be caused by the faulty coil? I have enough electronics experience to replace the coil, but not smaller parts. This is why I would like to find out how the fuse looks like so that I can possibly replace it too.

From my experience, the coil has never blown and the fuse has blown once, so I highly doubt either are bad.