Repair guides and support for your LG TV.

Why the brightness of the display became dark?

It is as if you got the brightness near to zero even if you have it to 100.

Still the same after resetting it to its factory settings.

I am sure that this is a hardware problem.

@Vincenzo Pisano make and model? what have you checked? Flickering how?

I had the same problem on an LG 32LB5610. The brightness levels/backlight were uniformly low 95% of the time, with some flickering, only occasionally and for a few seconds. Most of the time it was just very dark.

I tried a new power supply board, as thought the backlights weren't getting enough power, but the problems were identical with the new board. I couldn't face taking it apart to change the backlight so sacked it off!

Hello the tv screen is dark we’ve tried with settings and brightness and still the same what will be the problem?

I don’t know it happen suddenly a week ago

once you remove the back from your TV, turn it on and check if you can see the backlight on. Inspection holes can be used as shown 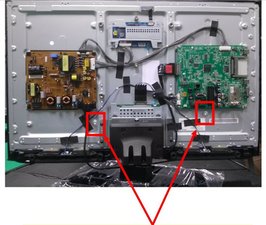 If no backlight is visible start by measuring the connector on th epower board and see if it shows 24V on it. 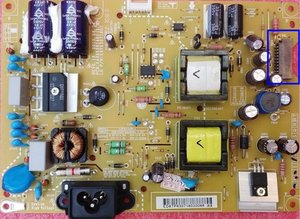 Post some images of all of your boards with your question. That way we can see what you see. Use this guide Ajout d'images à une question existante for that

I will remove the back cover and and check for the back light. I will also take some photos as you say...

Noooooooo! Don't do it..

(but you probably already did)

Is everything dark or completely black? Can you see a picture at all? Is the “darkness” uniform across the entire screen?

I would suspect that the back light is not working correctly. If the picture is there and uniformly dim, I would suspect that there is a problem with the power supply. The LEDs that provide the back light may not be fully energized. If that is the case, the power supply is faulty. If you can, post a picture of the boards inside the unit by taking off the back. That will help to confirm our suspicions.

Everything is dark, NOT black... You can anderstand what you are watching...

I again believe that the back light is working, just not up to full brightness. A fault in the power supply that does not provide the full voltage required for full brightness is the likely cause here. Most back lights are a series of LED strips with the LEDs in series. Each LED requires 3.3V for full brightness. As an example, 10 LEDs in series will require 33V to be fully powered. Lower voltage than the 33V may allow the LEDs to light, but at a lower output thus a dim picture. Look at the power supply and post a picture if you can.

I have a 42” LG Plasma that I LOVE the picture on and it’s “going black” any ideas?

There’s a LOT more they could have asked and looked into, before asking you to go above & beyond.

Googling the model & issue would have revealed (if they had bothered) that this is a common complaint with the 2017 models-on, and software/feature related (unless you actually have a defect)

Also, he could have asked is it constant or re-occuring(?)

I also have the same frustration with the same model and why I came here.

This happens EVERY evening, around 9pm, (During the day it’s normal again)

Yes, I disabled power-saving and it only got a shade lighter.. so particularly infuriating.

Lastly, I’d ask have you tried other modes, such as launching a video game or app through PC/HDMI(?)

When I launch a game, it becomes bright again and normal.. But the desktop is dim, just like TV mode.

This is another BIG clue, it’s NOT a hardware issue..

Please drop the screwdriver & back away from the set!!

This person isn’t going to replace your set, if something goes wrong & I bet taking it apart won’t lead to anything.. (good that is)

I DO hope it went well