I have got an iMac mid 2010 i3 with dead ATI Radeon 4670 256Mb card (boots with artifacts on screen and hangs, can not install OS.. you know) so I took that very same card from another 2010 iMac (same specs) which doesn’t sends video signal to internal LCD but it seems to be fine as it works with external screen

—(I’m afraid that L9000 problem that some one has said something about, but there isn’t any info about replacing it)—

So, computer boots fine, but it doesn’t sends video signal until OS is about to finish loading. That includes boot menu. 4th led is off until OS loads and then it lights and I get image on internal LCD.

Is there any solution for this? I think it’s strange that replacing video card with an identical one makes this kind of things

Also tried reseting PRAM but it didn’t make any good 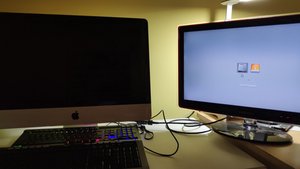 Hi Dan, thanks for your answer

Maybe you are talking about iMac dead video output, aren’t you? Yes, I have disassembled it to locate L9000 and it seems to be dead (open circuit on multimeter) Here’s a picture showing how it looks: 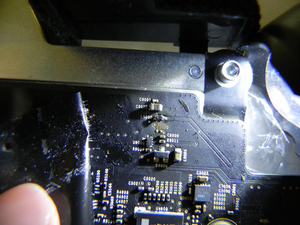 I have read the thread a couple of times and it’s not clear for me witch are its specs and where to buy in Europe/China. Also, I always thought inductances measures are uH, and they speak about Ohm….

Nevertheless, my concern goes more on the other iMac, the one that boots but LCD stays off until OS is loaded. Do you have any clue about? I’m planning on replace card’s thermal paste tomorrow, and check if it works again, but I’m aware it is not a solution for long term

At this moment I have managed to install Mojave (via dosdude1) and it works nicely. It’s a pitty that start up issue… 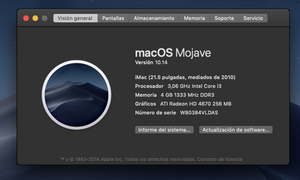 It's a 250 Ohm inductor which you can get from Mouser

Ohm as well as uH (Henry) are both used. Here the measure is Ohm.

I see, thank you!

Sounds like the internal display’s power connection has a problem on the logic board. Review this answer: L9000 inductance exploded: specs for a repair?