Kernel Error & Subsystem Error -what do they mean? can they be fixed?

The phone history and what it will currently do is in the paragraph below. If you simply want to dissect the kernel data and subsystem error are in the attached images. The kernel was last evening when attempting to determine why the phone had turned off and wouldn't turn on. The subsystem crash was this evening when taking another shot at starting the phone. The Kernel error was a black screen and the subsystem crash was an orange one. I don’t know how exact some of the information has to be as I took photos from another phone and it was difficult to read some of the letters and numbers. If a clarification is required I may be able to review the data to see if there is a typo or it could possibly be a different letter or number. Thank you for identifying the problem or possible problems and what could be done to resolve the issue. At this point I’ll be happy simply to have time to backup my contacts and anything more than that is a welcome bonus.

The phone is about three years old and hasn’t had any major issues prior to this afternoon. Everything is stock, no ROMs or anything other than a handful of apps from the app store. It phone worked fine the couple times it was used today then when I tried to check it it was unresponsive. I have tried various charging methods and removing the battery. If the phone begins to load the LG screen will appear then it will go black. If I plug in a charger without a battery the screen displays the batter with the triangle question mark then once a battery is inserted the circle bars start to load as if it is checking the battery life however it only loads six of those bars (an incomplete circle) then freezes and eventually goes black. One attempt at using the power and volume down button caused the factory reset screen appear and another time it displayed the kernel below which will hopefully yield some insight into possibly solutions. I can’t recall the last app to be installed however it would have been more than a week ago. Given the battery information that briefly displays it appears to be more of a soft brick than a hard brick so fingers crossed there is a hero out there able to lead me down the right path.

I left the battery out overnight and tried turning on the phone this evening which caused the Subsystem Crash message to appear.

Thank you to anyone who took the time to read my problem. It is greatly appreciated! Thank you! 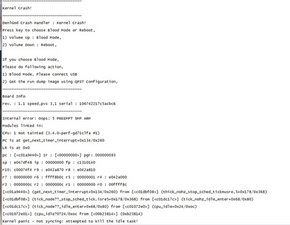 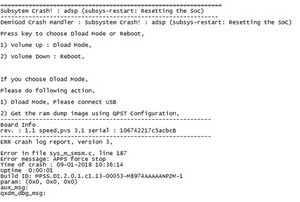