Greenish stuff on logic board

I have a MacBook Pro retina Late 2013

One day it refused to see the SSD, like an innocent I ordered an SSD for 300 CAD, I installed it and Na it did not see it.

I decided to go to Apple store. they kept it for a couple of days to tell me afterwards that it is a logic board issue and costs 10000 CAD :( you know.

I went on Internet and followed the instructions of a video on IFIXIT. I removed the Logic board and looked at it under a magnifier. Just behind the plug where the SSD sits, on the other side of the board I discovered a surface mount component that has leaked a greenish material and was obviously the problem to repair.

I copied the writing on it so I can buy it and install it (DDP 3X 8B) the surprise is no internet no electronic store no google knows what the hack is this component,

Does any one here know? It would be much appreciated. I can post pics if needed.

More likely you are seeing corrosion damage. Please take a tight picture of the area & one other that points to the area of the logic board Ajout d'images à une question existante

I think you are talking about this component

You canot find it under the name DDP 3X 8B because that’s not his name :(

on other motherboard is DDM 6D 4B 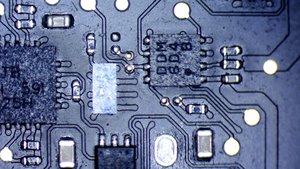 @soros - The component might be OK here. Sounds more like corrosion damage which needs to be cleaned and a trace repaired.

I think you are right @danj , most of the times is easily cleaned with alcohol and a little scrubbing with a needle

On green corrosion I use White Vinegar and Baking Soda made into a paste and place it on the area letting it sit for an hour or so, then I clean it off fully with distilled water, then I rinse with 85% isopropyl alcohol.

Alcohols & other solvents are also just not healthy to breath in all day long.

Everyday I learn something

The white vinegar and baking soda you make yourself?

@soros - You can't store it mixed as it looses its chemical reaction when it hits the copper salts (green stuff). I use a glass plate to mix the two, a teaspoon pile and an eye dropper to drip in the vinegar as I use a small dental spatula to mix it in.