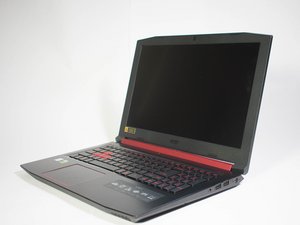 After some time I have noticed that the LCD lid became loose, not holding steadily, flapping from slight movements. It had come so far, that when the lid is opened at more than a 90 degree angle, either it, or the LCD frame gets pushed into the screen under it’s weight, creating a noticeable LCD bleed in the lower right corner. When pulling the screen back the bleed seems to disappear.

I am unsure whether the problem is with the hinges or the lid itself, but I am suspecting the latter. When opening, closing or moving the it in general, the movement of hinges themselves seems reasonably tight.

Additionally, when I close the lid, it appears to be elevated from the left hinge, so much so, that the opening between the lid and the rest of the case is big enough to observe the keyboard through it in some cases. It only occurs on the left side and pressing down on the left hinge fixes it. After that it cannot be reproduced by trying to pull the lid up, only by opening the lid and closing it again.

Did anybody encounter similar issues before? Does anybody have an idea on what it could be, and what can be done about it? Just about anything would be appreciated.

To start off with the unit will have to be disassemble to diagnose/adjust/repair the problem. Could be a simple case of hinge adjustment if the computer has allowances to do so. Suggest you watch video's similar to the following to get a feel of what's involved in the process of solving your problem.