No boot or random boot

My daughter’s MacBook Air is showing a heavy trouble.

History: I bought this computer in August this year to someone who seems very cautious with devices (packaging box with all accessories including screen original plastic protection). And it never showed any trouble.

Last Sunday my daughter told me: The system doesn’t start. The MagSafe led was Green. The power key button didn’t have any action, no light, no sound.

I tried with keyboard the NVRAM reset, and the SMC reset. No reaction except that the MagSafe LED stopped to be lit, LED went off. Same with long press on power key

Then I opened the system and disconnected the battery, tried to power it without adaptor and battery to reset SMC. After battery reconnected same state - Dead.

I also tried to boot without battery and adaptor - Nothing.

I have cleaned with air and brush the visible side of motherboard without noticing any damage. The onewire pin solder on the magsafe connector is not shinny but i don’t know if it is a trouble with ROHS soldering requirement.

The system was stone dead. I’ll tried pressing many keys on keyboard. So I decided to look for schematic on my other computer leaving the adapter connected on the system Suddenly the system booted by itself and the MagSafe LED was green… (about 15 minutes)

I was able to log and works fine without any reason to think about a software corruption. I saved the essential data on USB stick and all was normal. The battery was showing 100% of charge. I turned off the system and then... Dead with MagSafe LED Green.

After a short period of very dead sleep, the system booted alone once again…

I tried a NVRAM reset with terminal and reboot - OK

I turned off the system, it was able to boot.

I updated the OS: it reboots several times and I was able to turned it off and reboot.

Then I decided that it was saved and I put back the screw on bottom cover and now the system is dead again!

Note: is the back cover necessary of electrical test? There are three contact pin on each side of the board that are to be pushed by cover ? 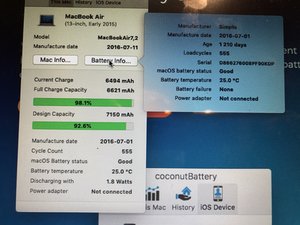 Here’s a picture of battery health.

The system has been working perfectly for last 4 days, and now it stop working again.

It seems that the MagSafe board has been « touch before » could this be a track ?

This morning the mac booted normally... i let it working on battery to see..

Note: no drop or water spill to report.

Lets check the MagSafe charger, review this Apple guide: Apple Portables: Troubleshooting MagSafe adapters. Make sure the cable & connector surfaces on both the charger and the system are in good shape.

@boyer - Well the battery is in good shape so that’s a good thing. I’m starting to think the MacBook Air 13" (Mid 2013-2017) I/O Board needs to be replaced Remplacement de la carte E/S du MacBook Air 13" début 2015. I think your charger is just not making a good connection to the MagSafe cable, so it is unable to charge the battery properly.

I have already test with two working adapter (apple branded) and even without adapter and batteries described at 100 % the mac doesn’t boot if i turn it off. Reboot is always ok ( the 4 time i did it). The sleeping mode is ok also. I will check the document you mentioned

@boyer - Did you get CoconutBattery downloaded? I would love to see a snapshot as that's going to help me help you!

@danj i will do this tonight, but the mac is running smoothly since yesterday after one full night of charge and a full day runnig without charger (the battery dropped to 76 % m. I have put back all screws one by one with a shut down between each screw. I finally made a ketboard smc reset. And up to now it seems ok.

One information to add: it was the first time my daughter discharged the battery enough to have an alert by system. I think that may be the battery is not calibrated ??