MacBook Pro 2018 TouchBar does not boot

I apologize for the mistakes in English, I don't write fluently.

When pressing the button to turn on the computer turns on but does not display anything on the screen or lights on the keyboard. (I know it is on because I hear the fan running, sometimes slowly and sometimes at full speed).

I tried to reset the SMC and NVRAM but it didn't solve the problem.

The only way to make the computer start is to press the power button several times while I connect and disconnect the charger cable. After several attempts and after trying several key combinations the apple logo appears and the computer turns on normally with everything working. I did tests with third-party applications and using apple's diagnostics (holding the D key at startup), and no problems were detected.

As I said earlier, after I get the computer to turn on everything works normally. If I put it to restart or shut down and try to turn it on after a few minutes it will turn on normally, but if a long time passes the problem will come back.

I took it to Apple, unfortunately apple support in Brazil is terrible, the problem was not detected and the logic board was condemned, causing them to charge an absurd amount to exchange it. After my disappointment with Apple's technical support, I took him on two other third-party assistance.

The technician said that the computer had small points of oxidation and that it would clean and give the chemical bath on the plate. After cleaning the problem still persisted. Some capacitors were changed but did not solve the problem. After 2 weeks the technician gave up, and said that in the voltage tests everything was ok, I couldn't identify the problem. In the other assistance the same happened. 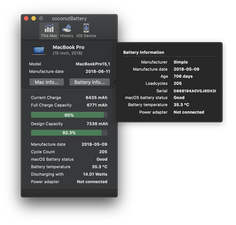 When trying to turn it on to download Coconut using the disconnect and connect the charger technique did not work, but I managed to turn it on by holding the power button for almost 1 minute, releasing and pressing several times. 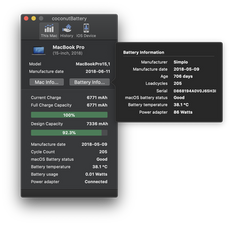 Coconut result with the charger connected

Macbook Pro doesn't boot when cold. Needs to warm up to start up.

My MacBook Pro does not start up when cold. It needs to warm up to boot.

No display, no keyboard light. When I open the lid it "turns on", I can hear the fans if I touch my ear on the bottom (Sometimes they turn very fast), but as i said, no video, no touchbar or keyboard signals. It makes the sound when I connect the charger. But it gradually warms up after pushing the power button. When it gets warm, I hold the power button for 10 seconds then press it again once before it successfully boots up.

When it gets hot and I can turn it on, everything works normally. I watch videos in 4k, play heavy games etc. I also did several hardware tests and no program reported a problem, including Apple's own diagnostics.

This problem persists if the macbook is shutdown and gets cold again. if I put him to sleep he can turn it on again while it is hot, but if it passes too long and it gets cold it won't turn on again.

I took in 2 technical assistance and they could not detect the problem. The first one said there was oxidation on the logic board, gave a chemical banhop but the computer continued the same way.

The computer has turned on normally about 5 times since it started showing the problem. But 99.5% of the time it doesn't start normally, until I was surprised when I opened the lid and it started normal 2 days in a row, I thought the problem was gone, but on the third day the problem came back.

I have done SMC reset & PRAM/NVRAM reset but it does not help.

I have also done Apple Diagnostics and says it does not detect any hardware issues.

I have reconnected the battery & display connections but problem still persists.

I reinstalled the system doing a clean installation. I have also installed other versions of MacOs

update on the problem: after I found out that the computer only turned on after heating up, I kept doing it every time I needed to use it. After a few weeks he was completely back to normal. No system updates or technical repairs were carried out. Now I have been using it for months and the problem never returns. The computer turns on normally, enters and exits sleep mode without any problem. Now it remains for the rest of my life to be in doubt about what caused the problem, but the important thing is that it is working!

Was the charger connected at the time?

the charger was not connected

Looks OK right now. As the battery is charged the charger won't be charging. You really need the USB-C power meter to see things externally.

What problems can the USB-C power meter identify? Because I already used another original charger and the problem continued.

If you can I would install this gem of an app CoconutBattery post a snapshot of it so we can see what it tells us Ajout d'images à une question existante. I would also get a USB-C power meter so you can watch what the system is doing externally like Satechi USB-C Power Meter

I commented below the result of Coconut.

I think we can agree the logic board has a problem!

Software or OS issues won’t react like this. The onboard diagnostics and even Apples internal diagnostics won’t locate this type of problem.

Let’s look at the physics of metal: I have a rod and a hole in a block (both are the same metal). The rod is slightly larger in its diameter than the hole so it won’t fit in. With nothing more than a bucket of dry ice and another bucket of boiling water can I get the rod in to the block?

So dipping the rod into the bucket, which will allow the rod to slide in?

So why does this apply here? I think you get it!

You need a new logic board as it has a defect in its electrical pathways (traces).

Time to visit an Apple Store or ship it into the Apple repair depot with a clear write up.