My MacBook Pro (2018 15” Touch Bar) started being super slow suddenly and fans are running at max speed even on a cold start. I quit all running programs and checked the activity monitor, there is a kernel_task using between 700-1000% cpu. I shut down the computer and ran Apple Diagnostics, it gave me the following errors:

''There may be an issue with the System Management Controller (SMC). Reference Code: PFM006''

''There may be an issue with the power management system. Reference Code: PPN001''

I tried resetting SMC but no luck.

I read on this website that some people had that issue after a liquid damage, that reminded me I had a few drops of a liquid on the trackpad last week (literally a few drops).

So I decided to open the computer (first time it is opened, I had never touched anything inside) to look for any liquid damage on the computer. I followed a tutorial on this website to remove the trackpad, and I didn’t find any corrosion on the trackpad nor on the cable between the trackpad and the board. I checked the mother board for any corrosion too but I didn’t find anything either (I really doubt the liquid would have gone to the motherboard anyway, since it was literally a few drops on the bottom left side of the trackpad. Also, I haven’t unscrew the mother board and check on the other side for any liquid damage yet.

So here I am. The computer turns on and load etc, it’s just super slow, fans are running at max speed and the kernel_task is always above 700% cpu…

Has anyone had this issue? Do you think I should unscrew the mother board and check under it even though I doubt the water would have gone so far? Should I replace the trackpad even if it seems to work properly? Are there other sensors I should check? (I believe this issue is due to some sensor not working properly)

Here is a screenshot of TG Pro: 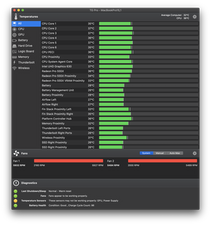 Here is a screenshot of Macs Fan Control: 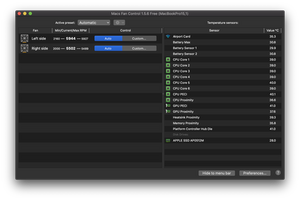 Here is a screenshot of iStats from the terminal:

I see some sensors with weird values with iStats but I’m not sure if they are really relevant since it shows negative values for cpu core 7 and 8 but I only have a 6-core cpu… Plus, TG Pro and Macs Fan Control seem to show normal temperatures.

Thank you for your help!

I went to an Apple certified store, they ran a diagnostic on the mac and they told me something is wrong with the logic board, and that I have to change it. They told me it's gonna cost around $1000. I didn't do it.

I removed the logic board and checked both sides, there wasn't any visible water damage, and since I spilled a few drops of a liquid on the trackpad only, I thought it might worth trying to replace the trackpad first.

So I changed the trackpad, and now everything is working perfectly!!! I ran the Apple diagnostic and I don't have errors anymore!!! I just saved $1000!

Apparently there are two temperature sensors inside the trackpad, and they didn't work normally on mine (probably due to the water damage). 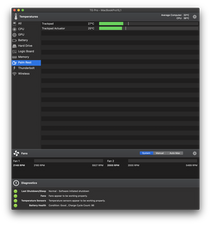 Also, I'd like to mention that apple diagnostic error codes were related to SMC (PFM006) and Power Management System (PPN001), TG Pro temperature errors were related to GPU and Power Supply. None of them were correct since the issue was 100% the trackpad.

I hope this post will help other people in the future!

Really glad you could fix it :)

This definitely seems like a sensors issue. It wouldn’t hurt to try removing your motherboard and checking for water damage, but I doubt that it will be enough to fix it. You don’t have to replace the logic board; there are many reputable microsolderers out there. Louis Rossmann has a video about this exact issue, so he could definitely help. Also, iPad Rehab has some very smart people, but I don’t know if they work on macs.

I completely removed the motherboard, and I didn't find any water damage on either side.

Thanks for your help @mronion64