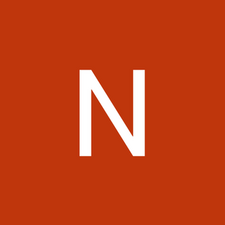 I see a black ribbon in the bottom of the screen in the morning why?

I see a black ribbon in the bottom of my screen when I open up in the morning actually it blocks my dock after a few minutes it goes off Please guide me how do I set it right.Thank you.Narayanan Lakshmanan India 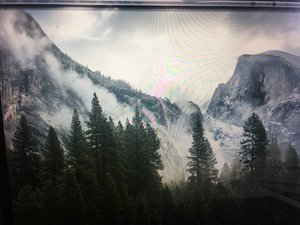 Note the top & Bottom edges build up these over & under scans (black as well as gray bars). Basically, the timing logic in the T-CON boards is drifting from heat damage! Either caused by blocked vents or the fans are jammed up with dust. Or in some cases the system is running hot from the process load being performed.

So far the issue is mostly seen in the 2016 & 2017 models. The only thing that makes a difference between both of these is their heat sinks and its placement. The 13” Fn model has a single fan Vs the 13” Touch bar which has a dual fan design both have intergraded graphics. Yet the Touch Bar model doesn’t have as bad an issue! Then if we look at the 15” Touch Bar systems they have a the same basic two fan design with a discreet GPU and it too is failing!

So effective cooling is the variable I see here! The displays are functionally the same across the two 13” models, and the designs are likewise very close to each other than the single vs dual fin design on the heat sinks! 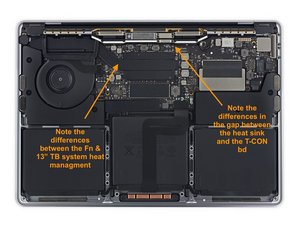 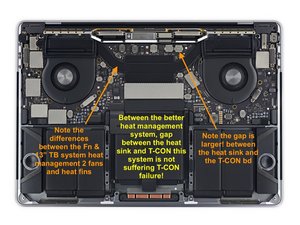 This is a serious design flaw in Apples newer systems which sadly has taken a bit of time to come to the surface. The root issue is the CPU’s Apple used is not what the system was expected to use. The 10 nm Ice Lake series just coming to the market now is what was expected back in 2016. Sadly, Intels slip-up was not better managed within Apple. Apple didn’t have a very good Plan B. They had hoped people wouldn’t push the systems as far as they did. And the placement the more sensitive T-CON logic which was in previous generations in the lid (a much cooler location) is now within the uppercase has also caught them as its just too hot for it given its location.

The only solution is first making sure the vents are not blocked and the fans are not built-up with dust or debris. Next is to install a good thermal monitoring app like TG Pro so you can monitor your systems thermals and when processing large and/or heavy CPU/graphics type of work to turbo the fans so the system is better cooled.

Once the display has gotten to this state the damage is done! While it will subside when the system has been allowed to cool (even placing it near an AC) the problem is not gone. The only solution is to replace the display assembly and then just be mindful of the systems heat levels.

Thank you very much I will work on it