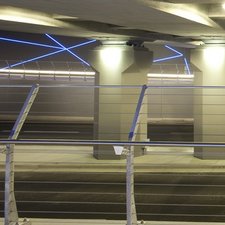 Hey guys, my screen isn’t displaying for some reason. The battery is dead, but can be powered through the charger and the SSD will be replaced. Now, everything works fine, but the screen does not have anything displaying. Upon further look, when holding up a light to it, there is a low display of bars and lines that flash, but some parts of the screen doesn’t show up. There is no damage to the logic board or any loose connectors except for one. The far left connector (which I assume to be either the left speaker connector or microphone connector; check the third picture) is taped on as there is no bracket in place just adhesive on with some type of tape holding it down. However, I’m not sure this causing the display to act like this. The previous owner told me that the only way for the MacBook to display anything is when you connect the MacBook to an external monitor. The external monitor can display only, not the MacBook itself (it will still be blank). Everything else works fine and functions properly. Is it the screen itself that is the problem or is the motherboard? 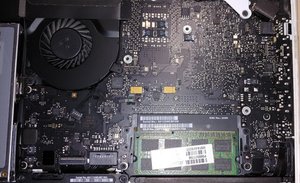 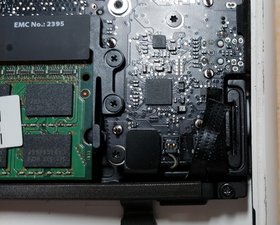 On an 820-2877 motherboard like yours, you should be getting around 50V at pin 18 and 19 on the screen connector (J9000). If you are not getting it at all it means that the line is shorted to ground. If you are getting around 5-8V it means there is something wrong with your boost/feedback circuit. Look for signs of corrosion/burn marks on the connector or on the components on the same circuitry. 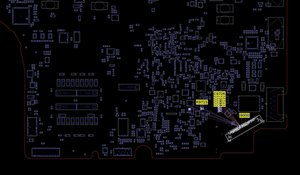 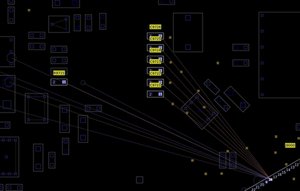 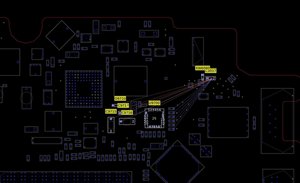 Hey thanks for the reply! From looking at the board closer, there aren't any corrosions or rust whatsoever, so that's a good thing. Other than that, looking at the schematics, it doesn't seem like the diagram you supplied matched with the board itself (I assume it might be different one that your displaying?)

The schematics are for the same motherboard.