The Samsung Galaxy Note II is a smartphone noted for its combination of a large display and software optimized for an integral self-storing stylus.

Help, there's something wrong with my wifi since I took my phone apart

After disassembling my phone, the wifi has gone wrong.I can use the wifi, but I have to get very close to the router to use it. If I move away a little bit, it doesn't recognize the wifi at all.

What did I break? What can I do to fix it? If I need to replace it, which part should I buy from Aliexpress? Please let me know.

Also I broke the red circle. Is that where the wifi antenna is? 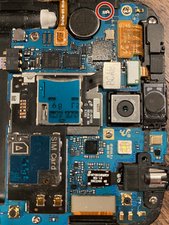 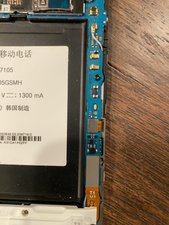 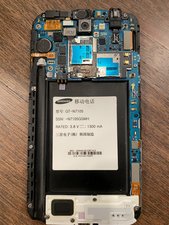 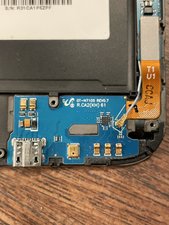 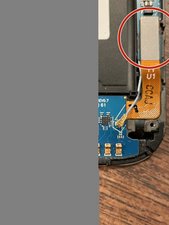 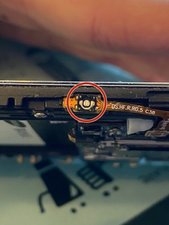 Thanks for answering. The model in the guide is the N7100 and mine is the N7105, the N7100 and N7105 apparently have different motherboards. If you look at the picture I uploaded, you will notice that the antenna hole is not on the left.

Check that the antenna cable shown on the right in your images is still connected at both ends of the cable.

The antenna connection near the top right side of the battery looks OK but the other end is obscured under the speaker module. I think that it is connected to the USB board

If the antenna connection is faulty then you will get the symptoms that you describe i.e. WiFi only works next to source of signal

It may be that the WiFi cable is damaged internally as it is actually two wires like a co-ax cable. An inner conductor (which is the antenna wire) and an outer braided shielding wire.

Also make sure that the flex cable from the USB charge board is plugged in correctly. I’m not 100% sure but I think that the WiFi chip is on this board next to where the antenna plugs in. Usually the WiFi chip is close to where the antenna plugs in so that the maximum amount of signal is provided to the chip and I can’t see a chip near to the other end of the cable up near the battery in your image

If you have a DMM (digital multimeter) and a thin enough wire to connect to the inner conductor, you can use the meter's Ohmmeter function to test for continuity of the inner and outer conductor from end to end of the cable.

If you don’t have a DMM or if the cable tests OK then you may have to start replacing parts to try and isolate where the problem is.

If you can’t test the cable then first try replacing the WiFi cable (supplier example only).

If the cable tests OK with a meter or if the WiFi doesn’t work OK with a replacement cable then try replacing the USB charge board (supplier example only).

Please check out the new pictures. It looks like it's stuck in place. I tried pulling it out and sticking it in again, but the same condition persisted. Why?

I thought you had abandoned me because I didn't get an email notifying me that I had an answer.

Which one do you mean by flex cable? I'm having a hard time figuring out which one I'm talking about even after checking.

I don't have a DMM so I guess I'll have to buy a new cable.

What is the effect of the damage to the red circle in the first picture? I first thought that the WIFI went wrong because I damaged the metal there.

I don't know what the component or whatever it is that you damaged but I don't think that it has anything to do with the WiFi because usually Wifi chips and antenna leads are close to each other so that you don't lose signal strength and there is no cable near to where you damaged whatever was there.

I tried unplugging and plugging the red circle in the last picture again, but it didn't improve the wifi reception.

I think the antenna is suspicious too.

I just ordered the antenna from Aliexpress and am waiting for it.

There's one more thing I need your help with.

You can see in the last picture that the red circle is missing and my smart phone won't turn on.

Can you please tell me which part I should buy from Aliexpress?

That cable looks like it's attached to the body.