Initial problem - “kernel is not seandroid enforcing” on boot attempt

I used Odin3 to put original tar.md5 image which I downloaded with Frija. Odin3 did not report any errors.

Boot pattern changed but still did not boot.

I tried to use Odin3 again but it was only giving “RQT_CLOSE “ error on upload attempt.

I did “wipe data/factory reset” and “wipe cache”. It showed multiple red lines in output with “failed to mount cache” being one of them.

After that I can’t enter either download or recovery menu. The tablet screen remains black and flashes with a white screen with a few horizontal dark stripes once a minute. ( picture attached). 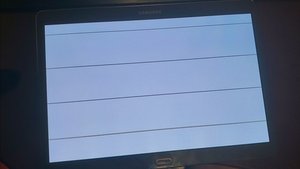 I disconnected display cable and charged for 10 hours. Reconnected cable but it did not help. Replaced battery but no use.

Time to throw it in the garbage ?

I would take out all of the parts except the screen and battery. Throw the screen away, and bring the battery to a battery recycling center.

Andrew, to be fair I do not believe there is a problem with the screen. It worked before my actions in maintenance menu. I feel it is the system itself is bricked.

I would keep the device for spare parts and get another one.