my Apple Watch (1st gen model) screen has become loose and can now be lifted easily to reveal the watch internals.
Initially the watch kept working just fine after I scotch taped the screen back in place but this was obviously not a long term solution.

After the screen flipped badly during an accident, it looks like one of the ribbon cable broke so it seems it will need to be replaced. Also, looking at the battery, it clearly seems inflated. Cf the picture which shows both the cut cable and inflated battery. 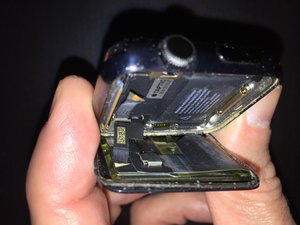 The global situation is the following:
- watch still charges fine
- charge does not hold very well (consistent with the inflated battery)
- watch powers on and reacts to buttons
- if screen is pressed down strongly, the watch detects it and turns the display on, so it looks like some contacts still work
- watch does not connect to WiFi/Bluetooth (my phone cannot detect it anymore)
- ribbon cable is cut

From what I understand, a new screen from iFixit will come with a new ribbon cable, so in theory, assuming that my only two problems are the battery and the broken cable, replacing the battery and the screen should be enough to fix the watch.
Does that seem a reasonable assumption?
What would you suggest?

Also, would there be a way to fix the ribbon cable somehow or only get a replacement for the cable without the full screen?

Thanks in advance for your analysis and advice!
Laurent

This is the conclusion I arrived to as well, thank you Dan!