After normal operation it boots up on a white screen

I pushed the power button on my 27 inch iMac from 2009 (11,1 model) with Lion one day and left the room. When I returned the Mac was in a blank white screen with mouse cursor movement and volume/brightness/DVD keys response. It also starts the Bluetooth discovery utility if my mouse or keyboard are turned off. I tried to get at the menubar or the lower programs tray without result and since I'm used to windows (sic!) I pressed the power button for a few seconds until it stopped working.

Anytime I power up now it goes to the same white screen and does nothing. Tried SAFE MODE (the SHIFT key while booting), tried PRAM reset (CMD+ALT+P+R keys while booting). Single boot (CMD+S while booting) didn't worked. I also booted from recovery partition and used DISK UTILITY to check my hard drive for errors and fix them. It did find some errors, it reported them fixed but the white screen is still there. Most of the reports on this issue said that the things I did should repair this issue, but for me it didn't. Please advise.

Thank you David for your reply.

I have learned the Lion lesson the hard way with the Rosetta support drop and the constant hickups, trust me.

I did boot in single user mode and fsck until everything returned ok, but still same white screen after normal boot. So it's still a no go.

I have this weird impression that the white screen is like an full-screen-application and that everything is working fine underneath. The HDD is spinning and after a few minutes it gets a little quieter, I haven't checked but normally Transfer used to launch at boot and I should see BitTorrent traffic on the network.

So, any ideas other than this? I will boot from SL disk that came with the iMac, but since I already checked the boot hard disk I'm affraid there isn't mutch to be done from there.

BTW, thanks for the support everyone.

Start by resetting your SMC. On this system you do that by unplugging the system for 30 seconds. To ensure all the capacitors are drained of their power you might hold down on the power button for 10 seconds during that time. The mentioned times are not extremely critical. Resetting the SMC could solve your problem. The second thing I suggest is hooking it up to an external monitor. If you have a picture there the problem is most likely the LVDS cable or LCD. I have not heard you mention anything about if it chimes or not at boot???

There are four built-in diagnostic LEDs on the main logic board that can help you to troubleshoot the computer. The LEDs are located on the bottom left edge of the logic board (under a piece of black mylar tape) and can be seen when looking through the lower vents of the enclosure. LED 1 is located furthest to the left. 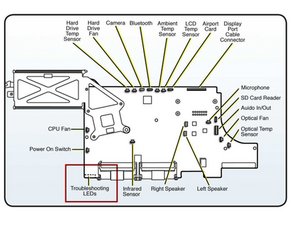 If LED 1 is lit and second LED is not visible when power button is pressed:

If the first 2 are lit and third LED is not visible after power on:

• Indicates that the computer and the LCD panel are communicating. This LED will be ON when the computer is turned on and video signal is being generated. If the LED is ON and there is no image on the display, then the LCD panel, the LED backlight board, or the cables between might be installed incorrectly or need replacement.

If if the first 3 are lit and the fourth LED is not visible after power on:

• Verify cable connections between LCD panel and logic board

• Verify external video functionality, and according to result check the following items

-If external display works then verify/replace the LED backlight board

-If external display works then verify/replace the LCD panel

-If external display does not work verify/replace the logic board

Please tell us the results of the fore mentioned.

I appreciate your advice, but I do not intend to open up my iMac phisically. It chimes allright at boot, it reacts at volume and brightness up/down and if I don't start the keyboard it will open the bluetooth connection application and it will keep scanning until I start the keyboard.

From this I draw the conclusions that my hardware is working ok, but the error is somewhere on the software side.

If it is software relate, you will be able to boot to the options menu - by holding down on the option key when booting - and the display will be proper. You should also have proper display from your OS X install disk preinstall environment. If such is the case then I would start by running disk utilities from the install disk and repair the hard drive. If that doesn't solve the problem and you can get to disk utilities on the install disk, I would back up your data through target node or by putting the hard drive in an external enclosure, then format the hard drive using the write zeros option to prevent critical OS files from being written to bad sectors on the hard drive. Then install OS X again.

I keep a copy of Snow Leopard install DVD on a flash drive just in case of problems, Have you tried force booting from the original install disc that came with your iMac.

There seems to be many problems arising with Lion...Personally I'm staying with Snow Leopard until things get ironed out by Apple.

Try these other options also -

Command+V = Starts your system in Verbose mode. (lists what is loading during startup, as opposed to the spinning icon with grey screen)

Command+S = Single user mode (used for troubleshooting in most cases)

If you're able to get a normal boot and Lion loaded with a normal screen I would suggest putting a install on an external hard drive for future emergencies.

Added note : Once you're able to get your iMac up and running without the white screen check for firmware updates for your model.

I would keep trying to get Snow Leopard going on your iMac, Do you happen to have another Mac handy ?

If so or if you know someone who would let you try putting the hard drive from the iMac into another Mac to see if it boots normally which I'm pretty sure that it will. It all sounds like a hardware issue to me.

Or if it's the original hard drive it may be failing, Are you still under Apple Care warranty ? Hopefully you are and then take it in to an Apple Store but in the mean time I'll keep looking around on Google for possible answers.

Lion seems to be more trouble than it's worth right now, But like Microsoft and windows Apple keeps shoving it down everyones throat knowing it's a real piece of crap underneath the hood that's about to come flying off like in one of those movies after some cop just unloaded a shot gun into your engine.

It's all about sales and making even more money, They forgot about the real Mac users once the iPad's and iPhones took off.

This is Horia Humaila. I've tried booting my original Snow Leopard 10.6.3 DVD and tried to re-install the OS from it, but it keeps saying that it doesn't have enough space on the single partition 1TB hard drive. The drive has 65GB left free, but doesn't matter how mutch I free it keeps saying it needs more.

Can I back up my installed software and install from scratch Snow Leopard? BTW now I have Lion and I'm totally unsatisfied with it, so SL would be great without loosing my installed applications.