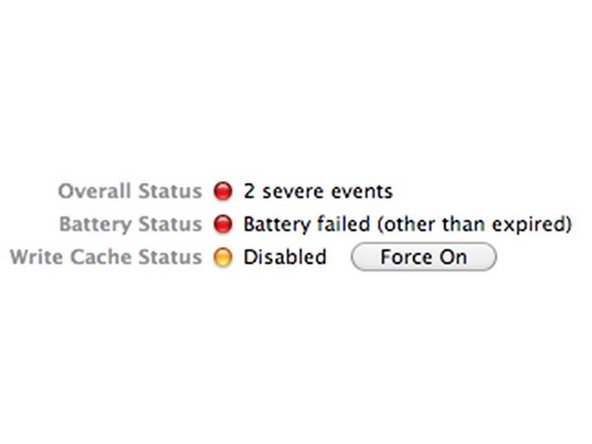 When they fail after a year or two in service you can bet the £££ you'll fork out to replace it that the cell isn't dead, but instead has got itself into a stuck state where the RAID card is confused about what to do with it.

In this guide I will outline how to open up the battery and recondition or even replace the cell, at significantly lower cost than buying a new battery.

Please don't attempt this repair unless you already have a good idea of what you're doing. Any mistakes have the potential to be extremely dangerous.

If you see a green battery symbol in RAID utility then the repair has been a success! You can now glue or tape the battery back together and enjoy hopefully another year or two of service from it.

If you see a green battery symbol in RAID utility then the repair has been a success! You can now glue or tape the battery back together and enjoy hopefully another year or two of service from it.

Oh man, this is the article I've been looking for. Apple no longer makes the "proper" battery for Xserve1,1, and mine has been KP'ing lately because of the RAID controller being unable to begin the reconditioning process (see: https://www.reddit.com/r/macsysadmin/com...). Maybe now I will finally have a stable Xserve1,1 running a Pikified Mac OS 10.11.6!

Bought two batteries from China on eBay for $20.

Soldered one into the Apple box. Twelve hours of battery conditioning later my Xserve raid is working great. Now I have a spare too.

Ordered a bulk of 10 cells directly from china for 6 $ each.

The replacement is very simple if this guide is followed and care is taken to ensure that no short circuit is produced.

You once again saved my day!

Please note that most batteries that you find/buy, will come with a PCM board (which is meant to protect the battery during charging/discharging). If your battery has this module, and you connect it to the RAID card, it will not charge. So either you can ask the supplier for a battery without this module, or will have to remove it before installing on your RAID card. Due to the fact that you will need to solder to the battery terminals, your best option is to snip the PCB just besides the battery contacts and then solder short wires to the PCB/battery contact point, which helps with doing a quick and solid connection without heating up the battery. Ensure you keep track of what is + and -, and that the battery is at least 3.7V (preferably just over, like 3.72V) before you put into your computer.

How to remove pcm from a battery purchased from china?

which system is responsible for this in the battery?

link to the auction with the battery