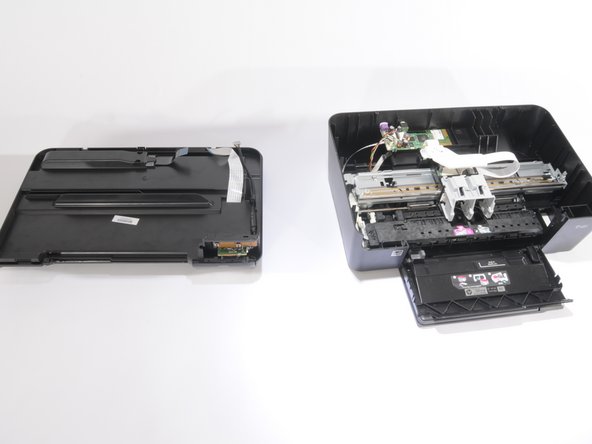 Disassembling the printer is relatively simple, and involving only one screw being removed and some cables being unplugged.

Thanks for this guide. I never would have found that fourth screw without this guide. The illustration of the "clip" for removal of the power quadrant face could have been more detailed and/or you could have said in the description, "Feel for the TAB on the right center of the power button quadrant behind the "cartridge door open" feeler and push it toward the outside of the printer". Other than that, this was great.

Thanks for the guide. Very easy to follow. Saved me some dollars.

I am a handy person and a Computer tech for family and friends,.

Some time You just need Instruction on how to do do things, Other wise You taking the risks of braking things instead of fixing them

Thank you for posting this. In place of the pliers, I recommend using a small reversible ratchet offset (mine was 3-1/4"W x 6-3/4"L x 1/2"H) to remove the 4th screw. It won't slide of the screw like pliers and will make both the removal and replacement much easier.

Where can I find spare parts for HP PSC photosmart D110?