Disassembling Nikon Speedlight SB-600 Bottom half of the flash 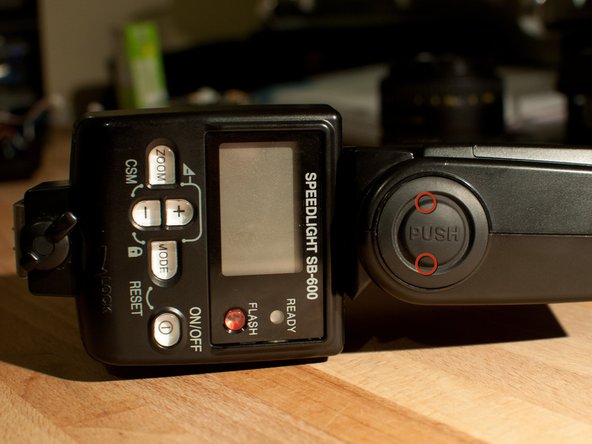 Before you get into this there are a couple things you should know:

- Camera flashes contain very large capacitors that are capable of stopping your heart. It's unlikely, but possible. There's plenty of discussion online about this.

- The Nikon service manual says after disassembly and replacement of certain parts you need to have it adjusted/calibrated. This is something you can't do yourself; you need specialized hardware and software to do it. However, after reassembling and quickly testing my flash I don't see any problems with it.

The Nikon service manual is available here or here.

To reassemble your device, follow these instructions in reverse order. See steps 10 through 12 for tips.

To reassemble your device, follow these instructions in reverse order. See steps 10 through 12 for tips.

Thank you for this PERFECT guide. I dropped mine, and, just like this guide said... it would not power up. Upon disassembly, found the EXACT problem. Was able to tack the component back to the PC board, reassembled and it now works perfectly! Looks like the SB-600 design may not be the best... I'd say, don't strop it, but if you are here you may have...

It's funny, but I have the same problem with the same part (the "black box", I think it's an inductor). I just disassembled the flash, so I haven't soldered the inductor back to its place yet, but I'm sure that will bring the SB600 back to life :) Thanks for the idea, I would have never checked the soldering of that inductor without this post, because it's on the proper place, just a bit loose when poking it with a screwdriver.

Even funnier, I just googled 'SB600 L301' and there are lots of people in the world with exactly the same problem. Some say Nikon placed the battery holder too near to this inductor and when the flash falls, they crash and the solder breaks. Sometimes the inductor's plastic case breaks too.

i encounter the said problem i manage to fix it ,i need to know an easy way to discharge the capacitor because i got hit a few times

Like Gergely said, my plastic case broke around the inductor. Does that make it trash? Or can I still solder and carry on?