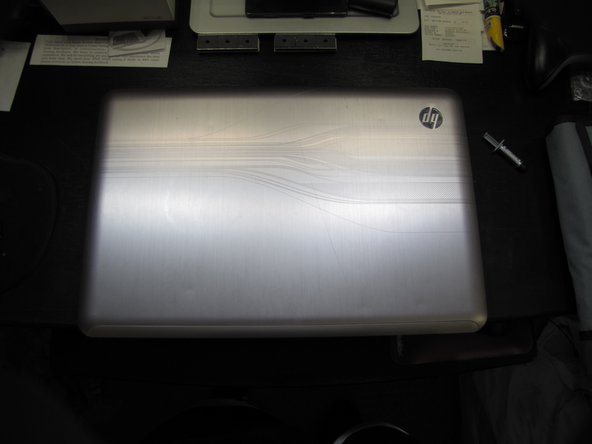 These units are notorious for running at very high temperatures. This shows you how to get at the heat sink, graphics card, processor, and all other goodies associated with it.

Thanks for the very helpful guide. I used it to fix the heating problem on my HP Pavilion DV7-4159EG.

I have one addition: Leave the upper left and upper right screw in place until you open the laptop to remove the keyboard (Step 5 to Step 6). To clarify: If the laptop is lying on the back like on the first pictures. I mean the most upper left and right screws, right below the display hinges. These two screws are on my model a bit bigger and "shinyer" than the rest of the screws.

Why? The hinges are mounted by one screw into the plastic casing. This is very flimsy. In addition, the hinges are hold in place by the two screws holding the casing together. If you remove theses screws too early it may happen that the hinges will rip out of the casing if you open the laptop. At least this happened with my notebook on the left hinge. It isn't usually a problem, because you can bend them right when you put the DV7 together. But it is one mount point less for the display.

Great strategy. Make sure to take out those supporting screws before you pry the bottom from the top though, otherwise you're facing a similarly bad situation.

HOWEVER, if you do manage to break/strip a screw post, it may not be the end of the world. You can use materials such as JB weld (decent) and specific purpose plastic weld (excellent if the right kind for the plastic) which could potentially make it stronger than the original.

My laptop was overheating and shutting down under load. I followed the guide, and the laptop is running cool. I was amazed how much dirt I removed out of the fan alone. I found the guide easy to follow, a couple of points I got stuck and that was more due to me not following the guide as described. One minor suggestion, is to describe the various screws and say remove 4 of type A,B,C etc. So that when you are reversing the instructions it's easier to know what screws go where. If I did something like this again, I'd get one those medicine boxes, and put screws from step 1 in container 1, step 2 in container 2 etc. Overall excellent guide. Thanks.

Thank you Nigel. Separate boxes are a good idea, so are magnetic mats.

These guides take quite a long time to build well, so I avoid some of that by not being overly specific with screw sizes. My hope is that people following the guides will realize that putting them in the exact order they come out will ensure perfect replacement afterwards.

Question: Is it possible to just replace the fan assembly without replacing the whole set including the "pipes" etc to the GPU and CPU. I have been looking for the parts and I notice that some sites offer just the fan. Thanks a lot, this is a great guide.