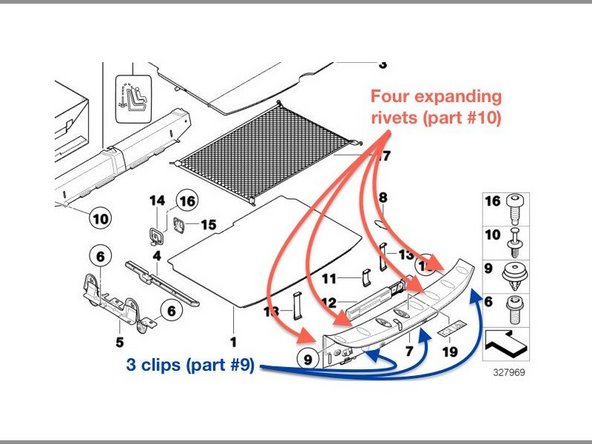 A common failure condition of the 2007–2014 MINI Clubman is the left rear split-door doesn’t open — the latch just doesn’t unlatch. Sometimes it will unlatch, but then won’t re-lock itself when you push the door shut.

This turns out to be a very fast and simple fix! I’ve put together these instructions with diagrams (from the official MINI parts diagrams courtesy of realoem.com). I think they’re complete but please let me know if anything is unclear or missing so I can improve them.

I originally wrote this guide and posted it on North American Motoring forum, as How to Replace the Left Barn Door Lock on the 2007-2014 Clubman.

The split door lock is actually pretty easy to access. You will need to pull up the plastic panel that lies across the rear door opening. That will get you access to the two big Torx bolts that secure the lock to the car’s body, so you can remove it. Then you just slide it out through a convenient hole in the body made for the purpose, then unplug it from the wire connector. Assembly is the reverse of disassembly.

Aside: Getting the Repair Part

The MINI part number is 51247167498. Plug that into your favorite search engine and you’ll get a ton of hits for it. Almost everyone selling it is going to have it drop shipped to you directly from MINI’s warehouses, so just shop for the best price.

(Personally, I’m fond of ECS Tuning. Great service and the support the Mini community. Get the part here.)

If the door is already stuck shut, you need to open it to fix it. This thread on North American Motoring can help: How to manually open the rear barn doors.

Enjoy a cool, refreshing beverage of your choice as you admire your handiwork and think how much money you saved by doing it yourself!

Enjoy a cool, refreshing beverage of your choice as you admire your handiwork and think how much money you saved by doing it yourself!

Great Thanks. I have done the above steps & replace the old lock. But now again with the new lock, the left barn door does not lock…. the right barn lock does lock perfectly but when I manually press the left barn handle, the door opens