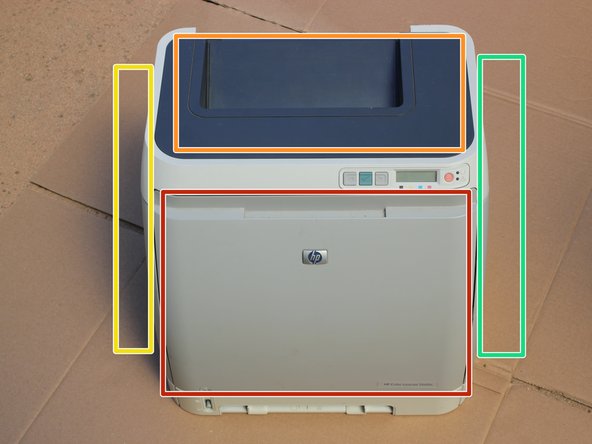 I had the "no printing of the red colors" problem and found this post. There was very little (no?) dust found inside the optical sub assembly upon my cleaning. After re assembly I had an issue with no toner printing at all. I think this may have been from the optical sub assembly not being fully seated against the case. Of course, I did reseat every cable as well so that could have been the cause. I Just finished my repair. All colors print and they look vibrant. Many thanks to you! What a wonderful post.

The Optical Sub-Assembly (OSA) is a real bear to situate properly. The first time I did this procedure (from a different online source), I failed to seat the OSA correctly and the colors printed fine on one side and blurry on the other side. I had to completely disassemble the printer again and seat the blasted thing correctly. I recently had problems with printing and toner blow-by, so I decided to do the same repair again. And this time, even knowing the problems I had last time, STILL failed to seat the OSA correctly! So now I'm using this excellent tutorial to tear the printer down a 4th time! Before I remove the OSA, I'll use some thickness gages to see where I went wrong, and for everyone to absolutely know that the thing is aligned properly. Be back soon!

The OSA has two screws on top and one underneath. The key to seating the thing properly is to hold the upper right side in so that the unit doesn't rock from left to right. Once you have that stabilized, put the screw in on the upper right. Then the left side, then the bottom.

OMG I wish I’d seen these comments at the end before I reassembled! I’m going to copy and paste your tip up above in the instructions because I reassembled and got very clean printing but ghost imaging. So, I’m going to try your trip to position it properly and see if that works. Thanks!

Excellent Guide! My 2600n hasn't printed like this in years! Thank you. Thank you.

After I did all of this, my printer will only print blank pages. Is there something I didn’t do correctly?

based on previous comments, perhaps you need to redo the steps and carefully reseat all parts, connections, cables. A few commenters talk about the black optical sub assembly being VERY finicky, and causing uneven or *no* tonor, like yours. Good luck.

While I appreciate the effort the author went through, as well as those who commented, this didn’t work out well for me. It certainly is not a 30-60 minute job. It took me in the range of 2-3 hours and I ended up with a printer that didn’t work. As I’m doing this at work and had a spare gap of time to fill, it’s not really worth it for me to open it back up again undo everything and redo it to see what might have gone wrong. With the steps involved in this and the care needed, I’d say this is more than “moderate” difficulty. Kudos to those of you for whom this worked out. RIP color printer.

My one main advice for anyone trying would be to make sure you have the right screw bit(s) as most of my screw drivers/bits didn’t work well on these screws. Also, I only had screwdrivers available—having a power tool would help cut down on the time. Best of luck!

Did all the steps now it says sensor error turn off then on. what could i have done wrong?

I was printing a song to being used next day at a 50 years birthday party. No red colour. Then I saw this and decided to make my yellow danish flag red again. Two hours later everything worked and I was able to print the song in the right colours. Thank you very much. Good job.

let’s see if anonymous user can post a reply

2 pink toner all together ,

i belive i broke high voltage board just by opening the case and laying the printer on it’s side, when i worked on the other side so magenta toner is no longer visable at all and it can’t calibrate colors either, but tryes quite badly

so be carefull when opening them, because you may break them too if you mess up

I completed all the steps and it did improve the print quality slightly. All in all, I think worth doing once in a while. Good guide.

Thank you very much, it did work !! thought the mirrors and lenses were not dirty , they were !

I did this yesterday and the result was no toner at all. Back at it.

I notice the optical unit box with the spring lever, rests over a bit of piece of plastic controlled inside. One of the flanges on a inside a circular “track” broke off during reassembly. After looking at this tiny bit of plastic it didn’t appear to be critical. I will simply have to leave it, too hard to fix. The bit of plastic that broke off pivots in a slot, and only rotates a short distance. There are 2 opposite identical flanges. The other is fine. The bit that broke off is only the tip that sticks out and keeps it from “going inside too far”. It touches nothing. Another failure point is the spring lever that goes inside a rectangular hole. Inside is another lever that pushes it to open the flaps in the box. There is no way to see this when putting it back in. It could go behind the lever or in front. I may have put the lever in the wrong spot. Getting this lever in the correct position may be causing the other seating issues described

I was right! Working fine now. It was the dang little plastic spring lever. Must have been in the wrong spot or misaligned. After taking apart again I carefully fiddled and nudged until it felt like the spring lever wasn’t hitting anything (hard to tell). I also set up my phone camera to sort of “watch” to see the lever “go in the hole”. Tight fit, had to tape it inside and slowly slide the box in. This was only a touch better than useless as a way to align it. After all that effort the printer is working… better… it still prints light but on ALL colors instead of no magenta. Of course it still won’t take paper from the paper tray (have to hand feed tray 1) but it did that before so a different issue.

I’m just happy didn’t waste $100 on a set of cartridges only to have bricked the whole thing.

p.s. The bit of plastic that broke off had zero effect at all. Just as I thought it wasn’t important.

Followed this guide due to faded colours. Found virtually no dust or dirt on the optics but cleaned them anyway. Instructions were fantastic and, to my surprise and delight, the colours are back to the standard of a brand new printer. Thank you.

Just successfully completed this servicing job.  Couldn't have even contemplated it without this excellent guide (plus comments).  Took me considerable longer but I was being extremely careful not to break anything.

Removing the cable connections was the most troubling.  But I ended up using a flat narrow nosed pliers that allowed me to grip the entire width of the cable right up close to the connector.  Then gently and evenly pull.

One final "funny" thing!   When I finished I powered up and printed a supplies test page to see if it had worked.  And the same fading fault was present across all colours . . . . so I switched off and went to bed disheartened.

Next day thought I'd look at it again.  Switched on ran the same supplies test page  . . and everything was perfect !!!!  I am still trying to work that out.

Just completed this procedure on my machine and it WORKED PERFECTLY… Absolutely solid instructions and very easy to do. Probably saved a $200+ service call - so really appreciate this very thoughtful post. Wouldn’t change any of the instructions and appreciate the multiple photos and details. Well done!

Thanks for this tuto, very well done. I wanted to do since a long time…and finally decided with the confinement ! It is not so difficult, but it take more than one hour !

My HP2605dn had faded colors and a light grey background on almost every print. Like someone else here mentioned there didn’t seem to be any dust on the internal optical parts, but I cleaned them anyway. To my surprise the printer is working fine again with vivid colors.

I did not remove the cabling from the upper guide.

After 14 years (it is May 2020 now), my printer finally had problems printing red. This article and its additional comments were spot on for fixing it. Thanks, everyone.

If you are going to try this, be patient and deliberate, making sure you have the correct tools. Take the time to understand each step. Having some needle nosed pliers handy to gently remove some of the purple-wired connectors was handy for me (make sure you grip the connector, not the wires). When you are putting it back together, stop when you get the wires and harnesses connected and in place; test the printer with the covers off in case you made a mistake and have to go back in.

Finally, recalibrate your printer when you have it working and put back together.

The colors of the old printer I bought got more vivid, also the black text can be read easier. Actually my printer is a HP2605dn, but nearly everything was the same as in the description. Thanks for sharing this tutorial!

hello every one, please suggest to me how i can fix a hp laserjet 2600n with 51.23 error code. the problem stated from black toner not printing at all then when i got the gear responsible for rolling the black catridge drum rolling it displays “51.23 error off and on” which i did severally. Any helpfull suggestion will do. Thank you as you reply.