How to troubleshoot and fix a Xbox 360 DVD drive 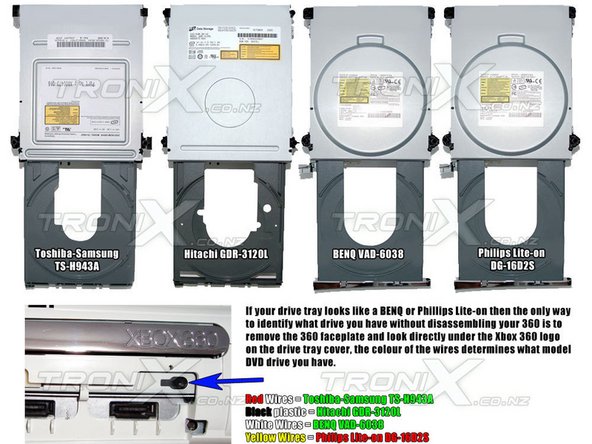 As many of you may already know, the DVD drive is matched or "locked" to the motherboard. Put simply, it is not intended to be a "pop-out/pop-in" repair.

This repair involves purchasing a new drive (after verifying which model you have), and repairing the components that have failed

In most cases that I've seen, its either the ejection assembly or the laser assembly - both which can be done in a fairly reasonable amount of time, and the laser replacement requires no soldering (removing entire slide assembly)

I will be posting images of a drive teardown (Philips), and parts identification

SYMPTOM: Slow/No-load but drive is audible

RECOMMENDED REPAIRS: Run a DVD cleaning disc in the console; if this doesn't cure or improve the problem ,then replace the laser assembly

REPAIR: Clean ejection mechanism with compressed air and lubricate with white lithium grease; replace motor and belt if no improvement

Thank you. That helped me a lot.

just a quick question about the Phillips LiteOn does this only have the ribbon cables or is there desoldering and soldering needed. Thanks

Its needs to be desoldered

For those of us who are a bit inferior, is there any "alternative" parts one could use to fix the eject problem on DVD-Drive? Like the rubber parts? Maybe a small rubber band with strong resistance? TIA.

Please help, i need to readjust the height of the guide rails on the sides of the laser, the long silver rods that the laser asembley moves on, i need to get those screws back to factory height, And Its not the pots that need readjustment