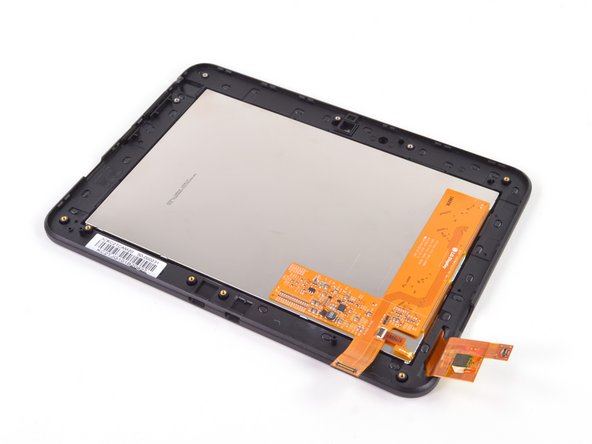 Use this guide to help you replace the Front Glass/LCD in an Amazon Kindle Fire HD 7".

Step 5 - the camera need not be disturbed, though the screws holding the plate do need to be removed.There was a rubber surround to the camera hole which came loose and had to be put back before the grey plate went back.

Step 6 - the smaller of the display cables (lower left in the picture) is held by a clamp and the screw holding it, visible under the white wire, needs to be undone before the cable is popped off..

The replacement screen assembly I bought did not include the plastic surround. I had to use a spudger to split the 'main' plastic rim (with buttons) from the screen, and a sharp thin- bladed knife to separate the 'inner' rim from the glass part, to which it was firmly glued. The new screen came with adhesive strips, so I carefully cleaned the adhesive remnants off the inner rim, aligned it very carefully and let it stick together. The main rim then clicked back onto this, and I had the screen/rim assembly as shown in step 9.

Just updated Step 6 in regards to the clamp.