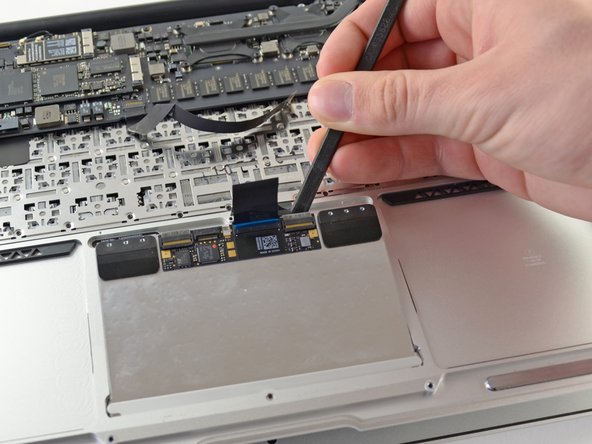 Use this guide to replace your Air's trackpad.

i have problems with reassembly. how do i manage it to get the keyboard connector in the socket again? i can't make enough pressure to get it in

just repaired my "old" 2012 Air's touchpad and thanks to your great instruction it took me exactly 30 Mins and was super easy...

Thanks for your great work!

@peter: yes, it needs a bit fiddling with the cables - just keep an eye on the flaps (they are closed on the new TP). Then it helped me to press the cable slightly in place with one hand and carefully pushing it in (moving it slightly left and right) with the other.

step 10 is not needed, in my second repair of this model I didn't remove it, this screw is only for calibration

Right. Step 10 is not only not needed but should definitely not be done! This is a pure adjustment screw for the clickpoint. Only readjust there, in case clicking does not feel okay after a change of the trackpad. Usually no adjusment is necessary.