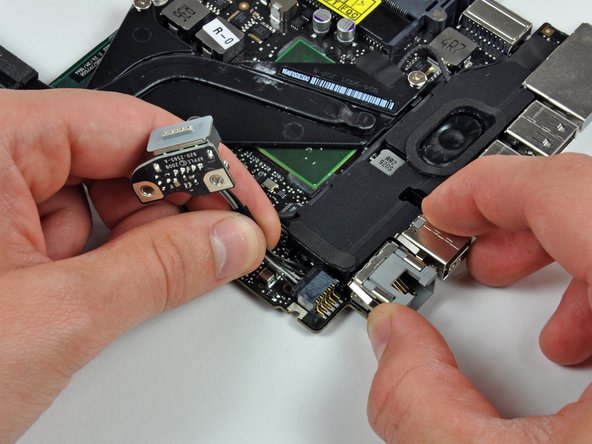 No power to the laptop? Replace the DC-in Board.

Hi, my macbook pro has a problem with the charging, i've already change the DC-In Board, because i thought that was the main problem and it works fine, the battery works perfect (i tested in another mac) the charger works fine (the same than the battery) and the problem is still there. I went to the mac store (México) and they told me "we have to change the motherboard and it will cost $14000 mxn (about $1100 dls)" I don't have the money to do that. do i have really change the the motherboard? there is no other clue to fix this? Thanks for the tutorial it's very well explained.

My Mac needs an ac/plug in order to turn it on! Hate to spend $$$ at Apple retailers! Anyone know any place to get one???

yyou can get one starting at eleven dollars on amazon

Reassembling: Make sure, the cable of the DC-In board is on the logic board-side of the screw hole when putting in the logic board. Otherwise the display data cable bracket won't fit in and you have to remove the board again.

So I hope, the DC-In board was really the cause of my problems. I changed the battery and the charging cable before and still had problems. At this moment my macbook loads again, but I don't know if its because of the board or again just luck. Thank you very much for the guide.

I have a specific question: does anybody know what is the purpose of the connector at step 13/14?? I broke it...