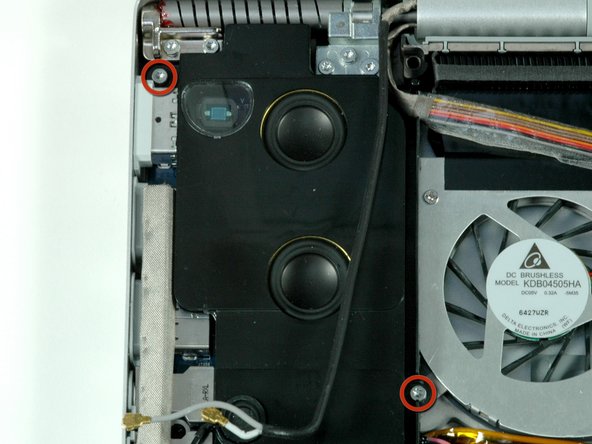 incredibly difficult. easy times unscrewing things but no guide as to "disconnecting.. cables..". used a jewelers loop & a flash light to see "push" on the connector, but that's it. Push down to connect? ..or up to disconnect.. slide it out- squeeze the something. nothing. I ended up breaking it off the logic board accidentally, rendering my computer irreparable, unless i could solder the wires to the board. yeah right. My advise do do it.

Sorry to hear that, I made almost the same experience as you. I was lucky to find out by my own, how to disconnect the cables on my A1212 and added a comment to step 17.

Instead of replacing the fans completly, you may be able to repair them.

Once you removed the fan, there is a screw that you not yet have to touch. Unscrew it and carefuly open the housing. After that, you can pull the fan wheel with the shaft out. Clean everything (avoid water), including the hole that holds the shaft. Put a drop of oil (10W-40 syntetic motoroil works pretty well) on a piece of tissue and oil the shaft. Reasseble the whole thing and check that it moves.

This may not work if the mechanical damage is too extensive or when the electronic is broken. If it works, you spared 50 bucks, otherwise the nice folks at ifix can help you out ... I did this to both of the fans after they got rather noisy, and they worked another two years since.

Easy job, super guide, vacuum the the cooling grill when fan is out, changed both fans, because one fan got very loud, it's a 2007 Mac book Pro, so no reason not to change both, went from 6000 rpm to 3000 rpm, nice, big thanx to ifixit…

While disassembling my A1261 to replace the right speaker I decided to keep going and give the computer a thorough cleaning. The fans and heat sink had collected a lot of dust. As I was removing one of the fans from its motor two of the blades fell off in my hand. Does anyone know if there is somewhere can get just the fan without the motor?