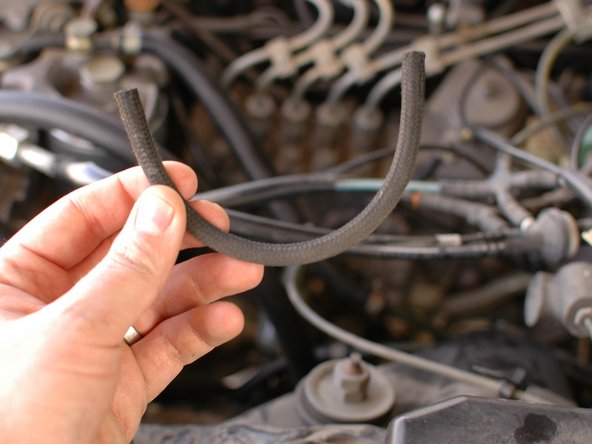 Brittle, old injector return lines can leave you stranded when they split and leak fuel all over your engine.

You'll need to keep an even closer eye on them if you run biodiesel. If you use 99% biodiesel they may only last a year. Biodiesel literally dissolves rubber!

Learn to replace them now, and keep some spare in your trunk for emergencies.

Once you're done priming, start the engine and let it run momentarily to ensure it's primed properly.

Once you're done priming, start the engine and let it run momentarily to ensure it's primed properly.

What size diameter and fuel line material should I get as a replacement?

The lines are available in Viton as well, which is biodiesel compatible:

I redid my lines after paying a shop here in Granbury,TX 1400.00 to replace my fuel injection system..thier tech told me when I picked my 83 Benz 300D Turbo up..that he had no idea what he was doing..after the fact..he put plain rubber hoses on her that melted on the way home.. I'm a 60 yr old female whose worked on cars for 50yrs, never have I seen such poor service..as this shop.