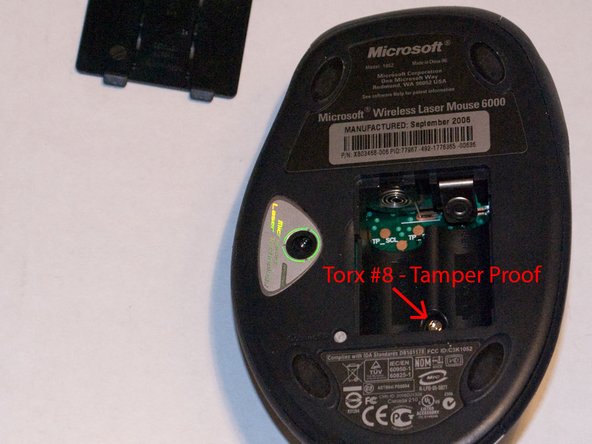 Disassembly to allow cleaning the mouse wheel. A #8 Torx Tamper Proof Bit will be needed.

Very thorough, thanks, but would like to offer a simple alternative that may apply. After several years, my MLM 5000 scroll wheel became very difficult to turn; thought I'd have to disassemble and clean it. Actually, the rubbery plastic coating on the wheel was shredding and rubbing against the outer casing, so I pried up a section of the coating with a small screwdriver, cut through its width with cuticle scissors, and peeled/rolled it off the wheel completely. The scroll wheel is now PERFECTLY smooth -- better than it ever was or than ANY other mouse I ever tried. Really love the feel of it now. And without the extra padding, my index finger now rests 1 or 2 mm lower, which I find a little more comfortable. The only drawback is with the slightly reduced height, it's very minimally more difficult to scroll horizontally (tilt scroll). The resistance is unchanged, but there's that much less surface to push against horizontally. Vertical scrolling (rolling) is great now.

Don't do this!! My wheel does not work at all now!

Thanks. Very helpful. For me, the first screw is a T9 Torx, not T8.

Many thanks. Just used this guide to fix a "Microsoft Wireless Laser Mouse 6000" (May 2007 model, came as part of a keyboard and mouse set).

The mouse had refused to work, no cursor movement, no clicks registering, nothing.

Also tried viewing the laser through an LCD screen via the camera on a phone to see if it was functioning, which it wasn't (usually it will show up as a pinpoint blue light - be careful when doing this not to look directly at the laser but at an angle, you should be able to see a neony blue LED like light through the laser 'port' / hole if it's working).

Literally on the verge of throwing the mouse out and I decided to take it apart completely just to see if there were any obvious loose components or connections.

So, followed this guide... nothing obviously loose although the laser unit did seem slightly ill-fitting... but after putting it back together, hey presto... it worked!

One other thing - on my model, the fascia of the mouse has become extremely sticky to the point of being very uncomfortable to use. AT first I thought it was airborne grease (no idea why it would be that but that's what it felt like, tacky), but in the end I came to the conclusion that it was a rubber coating they'd applied to some of the surfaces of the mouse to make it more tactile.

To get rid of the rubber coating I just applied some detergent and scrubbed it off gently with a steel wool pad. The rubber came off no problem... the surface is slightly scratched but for a 7 year old mouse I can live with that, it actually doesn't feel that bad to the touch when you have it in your hand anyway.

I had the issue with the rubber coating as well. I thought I had spilled something on it in my bag. Thanks for the tip! The slime came off great with a little coaxing.

Another point about this mouse. Has anyone had any issues with the wheel button failing? You don't realise how much you miss middle-click until it's gone!

Thanks for the guide.

BTW on the 5000 the whole top is a single assembly removed by lifting the rear a little then sliding backwards. My mouse the rubber on the wheel was so worn it was rubbing on the plastic wheel cover. I fixed it by removing the rubber. Works fine.