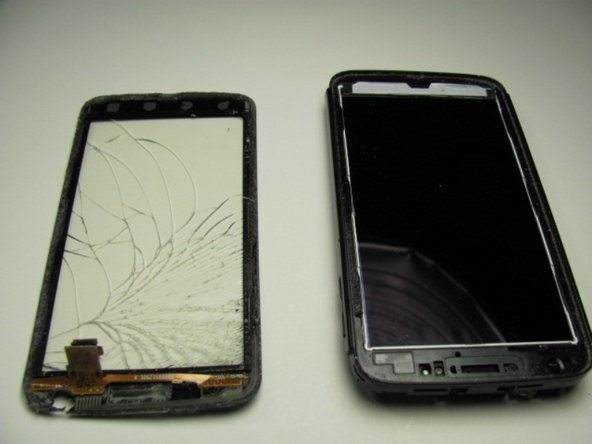 Use this guide to replace the screen of the Motorola Atrix 4G. To remove the screen you will first need to remove the battery, open the phone and remove the motherboard. Be ready to use a plastic opening tool, T5 Torx Screwdriver, spudger and head gun or hair dryer.

Caution! It is IMPOSSIBLE to insert the cable of the digitizer through the opening without REMOVING FIRST the screen (not the digitizer).

The two parts of the cable of the digitizer (connector + chip) are glued together when you remove the broken one, but in the replacement, if you glue together they don't pass trought the hole without removing the screen.

If someone has arrived to pass them without removing the screen, congratulations: I've broken the cable of a new screen in the process :(

I had to do this process twice, and here's what I've learned:

1) The motherboard does not need to be removed. I suspect this guide has you remove it so you don't damage any components when heating the screen, but there's no physical reason to remove it.

2) Yes, passing the digitizer cable/chip through the hole in the plastic housing is a royal PIA. I may have ruined the first screen I tried it with. Doh! For the second go round, instead of removing the LCD (like Hector recommends above), I just made the hole bigger. How, you ask? I took an emory nail file and trimmed it with scissors to be just narrower than the hole - then I filed away! With a few minutes of careful filing, I was able to double the size of the hole the cable has to pass through. Voila! There's still plenty of plastic left for the double-sided tape to be applied on the inside. Just be sure to clean up all the plastic dust first with a small vacuum or Q-tip before re-installing the screen.

tried this, broke first replacement digitizer screen , learned how to procede, Hector appears to be right if you remove the lcd screen it appears to double the size of the hole the cable passes through. what i would also like to see here are the following:

what material to use to "glue" the digitzer chip/connector together and in step 16 it shows the digitzer cable being removed from the metal it is attached to...how/what does one reattach it with?

Did anyone ever answer how to glue the flat cable (ground?) back on?